President Bill Clinton came by Ellen to talk about a variety of subjects, including his new granddaughter Charlotte. He said he was really inspired by watching her wake up to the world because she doesn’t have time to laugh or cry, she just soaks everything up with big eyes. Bill Clinton said his granddaughter was a “hoot.”

He also said it’s a great feeling being a grandfather and it really helps you come to terms with your own mortality and the cycle of life. Ellen wondered if Hillary was “presidential” with her granddaughter. Bill Clinton said she was a “deliriously happy grandma.” 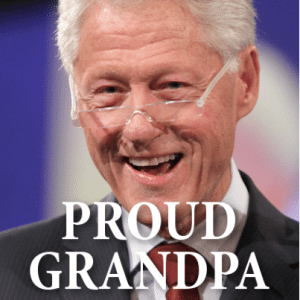 Former President Bill Clinton came by Ellen to talk about his Clinton Foundation, his granddaughter Charlotte, and whether his wife Hillary Clinton will run for president. (JStone / Shutterstock.com)

Bill Clinton said that the most interesting thing to him was that kids “learn early that 90 percent of life is just hanging on. And the trick is not to forget it when you really need to remember that.”

The last time President Clinton was on Ellen, Ellen gave him a giant framed picture of herself. Bill Clinton showed a picture of Ellen’s picture hanging in his office. Ellen said he just did that for the picture and it wasn’t really there all the time. Bill said that was the truth, but if she gave him a smaller one, he’d hang it all the time.

President Bill Clinton’s William J. Clinton Foundation does a lot of good in the world. President Clinton said he was most proud of the Clinton Global Initiative, which has raised $90 billion of commitments. He said he’s also proud of their work with AIDS and building healthcare systems in poor countries. He said if all the Ebola countries had healthcare systems that work, we wouldn’t have the hysteria we do now. He said the only person who died of Ebola in the United States was a Liberian citizen who was gravely ill when he got here. The two nurses who got it in this country recovered and the doctor who got it serving will likely recover.

President Clinton said Nigeria had an Ebola case and within 36 hours, 500 doctors went to 19,000 homes and they contained it and it was over. Liberia has 4.1 million people and they only had 53 doctors when the Ebola epidemic broke out. Clinton also said he thought we owed a special responsibility to Liberia because it is a country founded by freed American slaves.

President Clinton said he loves everything Shonda Rhimes does and he watches all her shows, including Grey’s Anatomy and Scandal. He also watches House of Cards. Clinton said he liked both Kevin Spacey and Kerry Washington, but the thing about both of their shows is that he couldn’t imagine a president or a president’s chief of staff could really get away with murder.

“I wish I’d known about that when I was in office. You know. Think of all the opportunities,” he joked. “So little time. So many people that have it coming.”

Ellen also said the president is always drinking on the show and she wondered how he wasn’t asleep all the time.

President Bill Clinton said he had no idea whether Hillary Clinton would run for president in 2016, but he said whatever she wanted to do, he would support her. He also said Hillary and Chelsea started a project at the foundation called Too Small To Fail. The project focuses on encouraging people to read to their children and getting universal access to preschool. He said it’s critical because we know the earlier children can read and the larger vocabulary they have, the better they’ll do in school and in their lives.

Then Ellen held up two onesies, which said, “My grandma’s a stay-at-home granny” and “My grandma’s running for president in 2016” and asked Bill Clinton to choose. She said she could only afford give him one. Bill Clinton said if he picked the one that said Hillary was running, it would be best for the country, but it’s not his decision. But if he picked the other one, Hillary and Bill would both be happy.

Ultimately, Ellen gave him both. But just in case Hillary did decide to run and Chelsea and Charlotte came with her on the campaign trail, Ellen also gave him a tiny car just big enough for Charlotte that was decorated like a presidential limousine. Bill Clinton thanked her and said it was great that the car was made in America.