Neil Patrick Harris is a funny and stylish dude. Aside from a perfect and adorable family, he’s the womanizer turned soft, Barney Stinson on How I Met Your Mother. He’s also starring in the new Smurfs film, out this summer. He and Ellen kicked off their interview by dancing into their seats.

“That was fun! I churned the butter,” Neil Patrick Harris said. 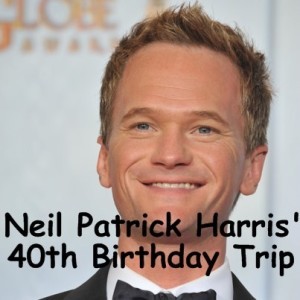 Ellen commended her friend Neil Patrick Harris on his acting, charity, style and, above all, his magic. Yes, Neil Patrick Harris is a wizard. He brought a guillotine to the show a few season back. An assistant helped strap him in, then Ellen released the blade. Just like Marie Antoinette, Harris’s head flopped into the basket. A bewildered Ellen waited, but he never recovered.

Ellen said that never before had the show had so many calls about a guest’s safety. They really thought that he was hurt.

“I was not beheaded, it was an illusion,” he confirmed. “I’m the president of the Magic Castle. That’s a time suck.”

Neil Patrick Harris joked with his fiance, David Burtka, that he wanted an extravagant 40th birthday party. For his 30th, his friend’s threw him a scavenger hunt affair that led them around the city. He joked that he wanted jets for 40. Oh, did he get what he wanted.

A month before Neil’s actual birthday, Burtka pulled out all the stops and disguised it as an anniversary party. They were dressed in suits by Tommy Hilfiger and everyone at the party gave him a little envelope with a number on it. He got home and found they held puzzle pieces. The next clue was, “Life’s a garden, dig it.”

From there, he got a package that had a shovel, flashlight, jelly beans, TUMS, Listrine Strips and a key. This was at one in the morning so he figured he had to go outside and dig. He found a spot, by their tree, that said “SCAN ME.” He dug there and found a locked box. The key opened the box and he got a mini iPad. While he thought that this was the big present, it was only the beginning.

It turns out that the “SCAN ME” was a special technology David used to show videos. The videos led them on a huge journey through Las Vegas, on a train to his hometown of Albuquerque and on and on.

“I got stopped by a cop, who didn’t give me a ticket but gave me another clue,” he laughed.

From there, they went to San Antonio, Orlando and Disney and it all ended in New York. There was another scavenger hunt in the city with friends and Burtka sang to Neil. Ellen said that she feels pretty crummy about Portia’s 40th now.

How I Met Your Mother Season Finale & Final Season

Season nine will be the last season of How I Met Your Mother. It’s been nine years of friendship, laughs and goats that cause Alyson Hannigan to flip a lid. This coming week is the season finale for the show and Neil said it’s not one to miss. No other details, but I’d bet good money that we don’t find out who the elusive mother is.

Also on his plate, Neil Patrick Harris is hosting the Tony’s again. He had plenty of humor saved up to promote the event.

“And this year we really want people to watch, so also this year: full frontal nudity. The Full Monty,” he said. “The Lion King on stage. Mamma Mia!”

Harper and Gideon are two and a half now and more adorable than ever. He said that the kids are saying things that he and David say at home.