Ellen DeGeneres and Sofia Vergara are both funny women whose sitcoms put them in the spotlight. But they have something else in common as well. They are both celebrity spokesmodels for Cover Girl cosmetics.

The sultry actress danced out onto Ellen’s stage for an interview, and if you felt like you needed a translator, you’re not alone. Sofia is well known for her thick and inscrutable accent.

Ellen said that Sofia Vergara complained about being served water last time she was on the show, so she had Andy bring out some Colombian coffee for the actress. 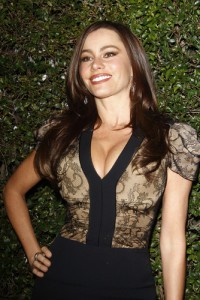 She also shared the present she got from Sofia’s Modern Family co-star, Jesse Tyler Ferguson. It squirts beverages like one of those urinating lawn fountains. Today it was full of coffee for Sophia, who wasn’t blown away by the special coffee they put together for her.

She also pointed out that the supposedly Colombian snacks Ellen gave her were actually Argentinian. What a rude guest. “I can’t win with you,” Ellen said. Sofia said next time Ellen should present her with emeralds.

Ellen commiserated with Sofia about her recent loss at the Golden Globes. But Sofia said she already has her Golden Globes. “Why do I need three?” she asked, joking about her imposing chest.

Ellen noted that Sofia is turning 40 and is on every list of Hollywood’s hottest women. Sofia said that her son laughs at her when he sees her on these lists. She said that it’s an odd comparison to actresses that are so much younger than her.

Sofia Vergara’s son is 20 years old, and she said he’s not taken aback by her recent popularity and success. He does bring his friends over, and Sofia joked that she likes to run around in a bathrobe to tease him.

Did you know that Sofia Vergara is a natural blonde? Ellen showed a picture of her blonde hair from her early days in Hollywood, and her hair color is about the shade of Jennifer Aniston circa 1997.

“I was young and innocent then,” Sofia said of the photograph. “You were never innocent,” Ellen argued.

Ellen asked Sofia to weigh in on the age-old question of who has more fun: blondes or brunettes.

“I would say the girls with the bigger boobs,” she said, which is either painfully honest or a sly dodge of the question.