Ellen: Maya Rudolph Up All Night

After months of laughter and new adventures, Maya Rudolph and friends are wrapping up the first season of NBC’s freshman comedy Up All Night.

Maya Rudolph joined Ellen DeGeneres to talk about her role as a daytime talk show host with a DJ. 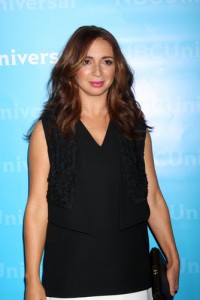 Ellen pointed out that her character Ava’s talk show is competing with Ellen in the fictional Up All Night universe. Maybe in season 2 Ellen can make a cameo and confront Ava head to head.

There are lots of different ways to get into show business. After hearing Maya Rudolph’s singing voice on Saturday Night Live, Ellen discovered that the comedian and actress started out in music.

“My first job out of college was touring with this rock band called The Rentals,” she said. She was a backup singer for Matt Sharp, a former member of Weezer. The Rentals opened for Alanis Morrissette and the Red Hot Chili Peppers.

Maya Rudolph’s parents were musicians, so maybe it’s in her blood. But Maya said she shies away from singing her mother’s iconic song. Her children have no such compunction about singing it around the house.

Her mother, Minnie Riperton, had a huge hit in the 1970s with the song “Lovin’ You.”

Ellen and Maya hummed a few bars, but neither of them were brave enough to attempt the actual song, which requires a huge vocal range.

Maya Rudolph’s latest project is a Prince cover band with her friend Gretchen. She said that Prince was what brought her back to SNL during her maternity leave; he appeared as a musical guest on an episode hosted by Steve Martin.

Prince told Maya about seeing her mother sing on The Mike Douglas Show, and told her it brought a tear to his eye.

“I would not lie about Prince,” Maya Rudolph said. “Prince is real.”

Maya brought her baby daughter along to the meeting with Prince, and the baby was captivated by his all white outfit. Maya said that Prince’s voice could make anything sound sultry and alluring.