The hilarious Martin Short is celebrating 40 years in show business. That’s a successful career, now! He came out on a dapper suit and proceeded to seduce Ellen, but she pushed him away just before their lips touched. She instead fixed his hair and welcomed him back.

He hasn’t been on Ellen’s show in two years! He’s been touring with his comedy. 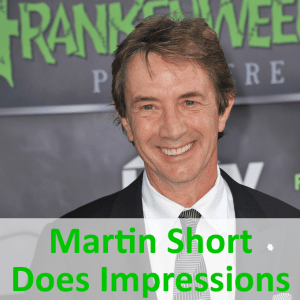 Martin Short is currently working on his book, but first he has to find his computer. He and Ellen played Heads Up!, Ellen’s hilarious new app. (Featureflash / Shutterstock.com)

Short is currently writing a book about his life and he’s making it larger than it’s ever been. He said so far, the titles are locked in.

“Let Freedom Hum” and “Stroke My Lady Fame,” are just a few that he’s considered. Along with “Laughing On The Inside” with a picture of himself at 29 years old.

“Doing it for the money,” gets straight to the point. “Born to Emote” and “Marty with a T” were not his favorites. Short plans to start writing this summer, once he figures out where his computer is. Maybe he’ll write it out long hand, he said like an old timey newsman. However he does it, Ellen know it will be a hit.

“He’s always told me I have a face for animation,” he said about Burton.

During the press junkets, Short and his co-star, Catherine O’Hara, were really burnt out from so many interviews with the same questions. The last guy of the day came in and he was completely cross eyed. O’Hare and Short had no idea who he was talking to and had to take turns figuring out the questions. It kept them on their toes, but his impression of the interviewer was priceless.

From Hootie & the Blowfish to the Grand Ole Opry, Darius Rucker is rocking and rolling like a wagon wheel all over. The country singer has the song of the summer with “Wagon Wheel.” There is something about summer that just makes you want to listen to all the country music you can. Rucker’s song has been playing since the beginning of the year in bars across the country, but now that the weather is warm it’s the only song you want to listen to. Rucker’s voice has never been better. It’s warm like sunshine and smooth like a field being washed over with wind.