Ellen showed a clip of NBC‘s hit show Community. The characters were trying to decide who they wanted to be lab partners with by making a list of their top eight choices. 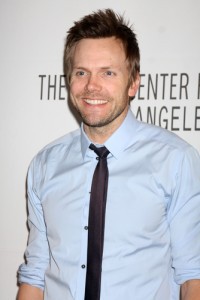 “Do you have a book coming out Ellen? Today?” he asked.

Ellen picked up a copy from behind her seat and told him, “I’ll give you one. I’ll sign it.”

“I don’t know how to read,” Joel teased.

Ellen asked Joel about his show on E!, The Soup. She wondered whether Joel covered the Kardashian wedding. Joel said he did not but that it was definitely big news.

“A lot of people were like, ‘Is the Kardashian wedding bigger than the royal wedding?'” Joel said. “And I say yes.”

Joel was clearly being sarcastic, implicitly teasing America‘s strange obsession with celebrities. He called the Kardashian wedding the biggest thing to happen to humans since they lost their tails.

“The biggest story since [the Kardashian marriage] has been the nipple slip of Nancy Grace,” Joel said. “It didn’t slip. The nipple was trying to escape. Yes, like the Von Trap family in The Sound Of Music.”

“The news you do, obviously people are interested in it,” Ellen said.

“It’s saddening, but I profit from it,” Joel said.

Joel McHale said the public’s fascination with celebrity gossip especially concerns him now that he has children.

“Now I have children, so I worry for them,” he said, referring to his sons, who are three and six years old.

Ellen showed pictures of Joel‘s children. Both of them had shaggy blonde hair.

“We did this thing where you just take the diapers off and you wait,” Joel said. “It was pretty hairy.”

Joel said it was a messy process but eventually worked out.

“I had said to him, ‘Good job’ so many times so now when I go, he’ll run up right next to the toilet and say, ‘Good job, Daddy!” Joel said.