Jillian Michaels from The Biggest Loser stopped by Ellen January 28 2013 to talk about her show. Ellen first asked her about her children.

Jillian Michaels has two children. Her three-year-old daughter is Haitian and Jillian adopted her when she was two. Jillian said she was lucky her adoption story had a happy ending, because a lot of parents who want to adopt aren’t able to. 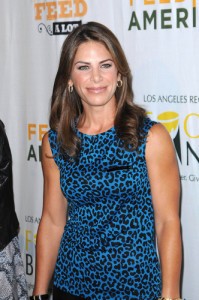 The Biggest Loser’s Jillian Michaels stopped by Ellen January 28 2013 to talk about the show, being a mother and her new book. (s_bukley / Shutterstock.com)

Michaels said she never thought she would be a mother, but she didn’t want to get to the end of her life and realize she should’ve spent less time at the office and more time at home.

Jillian Michaels left The Biggest Loser for two seasons because she wanted to start a family and focus on her own business. Michaels said when she does The Biggest Loser, it’s hard for people to see why she does what she does and she said she comes off as a cartoon character. But it’s what people know her for, so she wants to keep doing it.

Jillian Michaels has a new book called Slim for Life: My Insider Secrets to Simple, Fast, and Lasting Weight Loss and the book dispels myths about health and working out. One of these was that sweating helps you burn more calories.

Jillian’s book also says to only watch 14 hours of television a week.