Jessica Chastain was on Ellen for the first time and she was super excited to see Ellen even though Ellen touched her butt on accident when she hugged her. Apparently Ellen thought her dress exposed some skin around her waist so Ellen moved her hand down and landed on Chastain’s butt, although she said she had no idea.

After the awkward hello, Ellen said she loves how talented Chastain is and how she plays so many different roles where she is unrecognizable. Chastain said she is able to adopt to different roles because her success was not overnight as many people have suspected. She studied at Juilliard, did a lot of theater work and worked her way up from bottom. 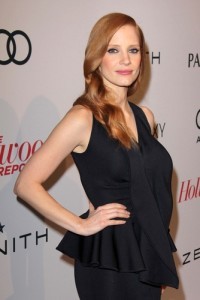 Ellen talked with Jessica Chastain about filming Zero Dark Thirty, why she thinks her character is a good representation of women and a vegan pudding recipe. (Helga Esteb / Shutterstock.com)

For her role in Zero Dark Thirty, Chastain plays Maya, a woman who really exists and is an undercover agent for the CIA. Just like in the movie, this woman fought for a long time to not be dismissed from what Chastain called the “boy’s club.” Higher ups dismissed this woman in real life just as the higher ups in the movie did with Chastain’s character.

Ellen showed a clip where Jessica Chastain’s character was yelling at one of her superiors telling him if he didn’t finally listen to her and let her go after Osama Bin Ladin and follow the lead she had, she was going to blackmail him.

Chastain told Ellen she rescued a three-legged dog when it was only 7-months-old and now the dog has grown up to be about 4-years-old. It even looked just like Ellen’s dog Wolf.

Before she left the stage, Chastain told Ellen she made her vegan pudding since both of them are vegan. Chastain said she has been vegan for about six years while Ellen only has five years under belt. And Chastain is probably eating a little as well because her mother is a vegan chef.

And make sure to watch the video below to see how cool Ellen and Jessica Chastain look when they wear aviator glasses.