Jennifer Aniston is the Sexiest Woman of All Time.

That’s according to Men’s Health magazine, and that’s a nice superlative. Jennifer has been a pop culture figure since her breakout success on the 1990s sitcom Friends, and has transitioned into movies since that show ended in 2004.

Jennifer beat out competition like Jennifer Lopez to make it to the top of a list of 100 women in Men’s Health. Ellen also said that Jennifer one of the sweetest people she’s ever met. 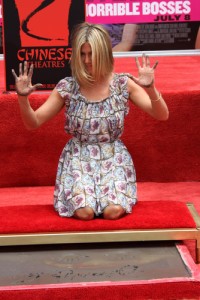 Ellen showed off pictures of Jennifer’s new puppy, Sophie. Ellen said Sophie is a cute puppy, which is redundant if you are a fan of puppies.

One picture featured Sophie in a jacket, and another featured her sleeping. Ellen and Jennifer swapped stories about puppies, who look adorable but like to get into trouble.

Jennifer Aniston recently had a birthday party, and Ellen said she was glad Jennifer didn’t want gifts, because Ellen didn’t think she could top what she got Jennifer last year.

Ellen showed a clip to remind viewers what she gave Jennifer. It looked like a breast massager. “Am I getting milked? What’s happening?” Jennifer asked in the clip.

Ellen said that Jennifer’s breast massage online video is one of the show’s most popular clips ever.

Jennifer recently joined the ranks of the celebrities who are commemorated on the Hollywood Walk of Fame. The ceremony was held in July 2011, and it’s a rite of passage for celebrities whose contributions have shaped our culture.

She has also been nominated for a Directors Guild Award for her work on Five.

Five was an anthology film about breast cancer created for the Lifetime cable network. Jennifer Aniston’s contribution, “Mia,” starred Patricia Clarkson, Tony Shaloub, and Kathy Najimy. It told the story of a woman who recalls her journey with cancer through flashbacks.

Read about Ellen’s Surprise For A Cancer Mom.

She called her nomination shocking, and said she enjoyed working on that project for Lifetime. She invited Ellen to appear in a future project she directs.