Jason Sudeikis is one of the funniest and most talented cast members on Saturday Night Live. His master impressions range from Vice President Joe Biden to Governor Mitt Romney to Donald Trump. However, Jason revealed something about himself on the Ellen show that no one knew before: he just may be the world’s biggest Ellen fan. See for yourself!

Jason and Ellen have never met before, except for the time that Ellen signed his book at a taping of her sitcom in March of 1996. Jason still has the book, and he brought it with him. Ellen signed the book, “To Jason, Hey, What’s Up?” Back then, Jason admitted that he had a “big ol’ crush” on Ellen. 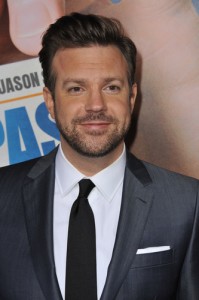 SNL star Jason Sudeikis revealed his love for Ellen and received a gift from his idol on her show. (Jaguar PS / Shutterstock.com)

Jason’s giant love of Ellen even extends throughout his entire family. He had a poster of Ellen in college that his little sister Lindsay later took with her to college. While he was in college, he wrote a newsletter in which he proclaimed his love for Ellen. Jason’s uncle– who just so happens to be the actor George Wendt from Cheers— was the first person to hint that Ellen may not be so into him (or into any men, for that matter).

Jason said that he admired Ellen’s comedy talent, and as he grew up, he wanted to be either Ted Danson, Eddie Murphy, or Ellen DeGeneres. Ellen said that she feels lucky to be considered among such a great group of people! Ellen was also surprised and flattered to find out that Jason loves her so much, even though she was forced to “call in security immediately.”

Jason is featured in People Magazine’s Sexiest Man Alive Issue. He may not be the cover boy (that’s Channing Tatum), but he did make the inside spread. Ellen is almost as much a fan of Jason’s as he is of her. She said that he’s funny, talented, and sexy.

Later, Jason got to play a fun game with his idol. Ellen held up a picture over her head, and when Jason did an impression of that person, Ellen tried to guess who it was. He did great impressions of Cher, Simon Cowell, David Letterman, Ricky Gervais, and more.

Jason’s girlfriend is the lovely and talented actress Olivia Wilde. Ellen knew that the pair were planning on moving in together (but how did she know that?), so she decided to give them a housewarming gift. It was a truly hilarious, over-the-top painting of Ellen’s head photo-shopped on a pin-up girl’s body. A perfect– and very tasteful– wall decoration for the world’s biggest Ellen fan!

You can see Jason Sudeikis on the Saturday Night Live Christmas special November 28 2012.