Jack Black is known for being spontaneous and unpredictable, and his Ellen Show appearance proved to be no different. In a T-shirt and sport coat, actor Jack Black skipped and spiraled onto Ellen’s set. He explained that he’d intended to break dance but couldn’t pull it off.

Ellen said that Jack Black’s last appearance on the show featured a dare and old fashioned swim trunks. He took a few laps through the audience and did some time in a dunk tank. 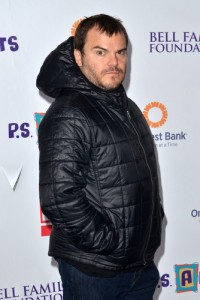 After six years, Jack Black is getting the band back together with a 2012 Tenacious D tour. (Image Credit: Helga Esteb / Shutterstock.com)

Jack Black confirmed what countless others have said, that Ellen’s show gives guests the best gifts. He is the latest in a long line of guests to praise the comfort of Ellen Underwear, which each guest of the show receives. Ellen said that past guest Justin Theroux asked for additional pairs because he enjoys them so much.

“I want to buy a stack of them, if you please,” Jack Black told Ellen.

Ellen said that Jack is always funny and seems to be outrageous all the time. She asked if this is the real deal. “When the lights come on and the cameras are rolling and I see the red, there’s an adrenaline thing that happens,” Jack Black said. “But the truth is, when I’m just hanging, I’m pretty shy.”

As a high school student, he said he was too shy to ask anyone out. Then he would build up his courage and become overly enthusiastic. He once invited the entire school’s dance troupe on dates to Disneyland on the same night, in the hopes that one of them would say yes.

“And then they all of course talked to each other and said, ‘What an idiot,’” he recalled. “I was old enough to know better.”

Ellen was excited to announce that Jack Black is getting ready to go back on tour with his band, Tenacious D. It’s been six years since they were last together.

Since she’s been out of practice at standup, Ellen thinks she would be nervous to get back out on the road. Does Jack Black feel the same way?

“I do. Yeah, I get a little jittery,” he said. “But I know at the end of the day, I just get such a thrill out of performing live with the D. Once I get out there, the adrenaline will take over.”

There is even a physical component to preparing for a live tour, because nightly performance on huge stages can become an intense workout. He said you have to continue rocking, breathing, and dashing across the stage.

“I do a lot of jogging with my guitar,” he said, comparing himself to basketball players who run while dribbling. “It’s a lot of work, but it’s worth it.”

Jack Black said he tries to keep up with cardio through activities like Frisbee. Ellen called this great exercise, especially if your opponent is a bad throw. Jack said he has a dog-like affinity for chasing flying discs.

He’s also been working on a new move called the Tiger Roll, which he said he saves for special occasions.

“We’ll return with more Jack Black. Or will we?” Jake Foushee pondered from his announcer’s booth.