Last time Howie Mandel was on Ellen, Ellen gifted him with a powder blue cape. It was meant to be a joke, but Howie came out wearing it today. He definitely caught Ellen off guard and was always one step ahead of her jokes. 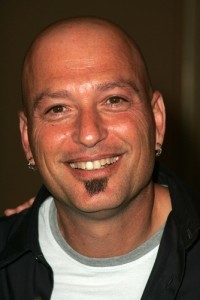 Howie Mandel promised to make someone a star this season on America’s Got Talent. (s_bukley / Shutterstock.com)

He said he loves wearing the cape Ellen gave him. It turns whatever regular or mundane activity he’s doing into a caper.

Howie said his new hobby is taking pictures. He brought some from Ellen’s back hallway to show off. There was a great one of Sophia Grace and Rosie with Nicki Minaj and one of Tom Hanks and Ellen. Ellen tried to explain that he didn’t take the photos, he stole them. Howie disagreed.

“They’re not mine, but I’ve taken them!” he explained.

Ellen: Trapped In an Elevator

Ellen did a pre-enactment of what would happen if she had gotten stuck in an elevator today, inspired by the stars of Modern Family. Howie said he once got stuck at the Galleria Mall in Los Angeles when the power went out. For two and a half hours he was trapped on an escalator. He had to wait for the fire department to come and they walked up and brought him down. He said it was a huge panic.

Howie told Ellen that they just finished filming in New Orleans for the first episode of America’s Got Talent. He predicted that based on what they’ve seen, a top 10 contender will be from New Orleans. He said they saw a lot of amazing talent and then some things that will have to be blurred out for family television purposes.

There are now four judges on America’s Got Talent. Heidi Klum and Mel B joined the judges panel this season. He said the dynamic is working well. Unfortunately, the people of New Orleans were not happy when Mel B told them she wasn’t a fan of brass bands. The 2,000 people in the auditorium started yelling and booing her after an audition.

Howie’s friend gave him a Jawbone walking wristband and he said it helps him monitor his activity throughout the day. He loves that it tells him how many steps he has taken, but now it’s interfering with his OCD. He has to hit 10,000 a day to keep healthy and promote circulation. Since he had a flight, he’s only hit 2,300. He and Ellen did the rest of the interview on foot.

“I believe sitting is the new smoking,” Howie said.

Howie told Ellen that he’s getting recognized more now, but people are thinking that he’s someone else. While in New Orleans, a fan stopped him for a photo. The woman told him how he is inspiring her to get in shape and eat healthier. He then realized she thought he was Michael Symon from The Chew. He decided to have fun with her and took another picture. He held on to her for an inappropriately long time until her boyfriend made him get away.

“This is a personal apology to Michael Symon,” he said. “You have someone in New Orleans who thinks you are a problem.”

He said he’s also getting confused for Jimmy from Train.