Ellen shared a video that Sherrie Gahn, the principal of Whitney Elementary School of Las Vegas, sent to her.

The video detailed the struggles of the school. According to Sherrie, 85% of its students are on free or reduced lunch and many of them are homeless.

Sherrie said she realized how bad things were the first day she arrived at the school when she noticed that children were taking ketchup packets home from the cafeteria. 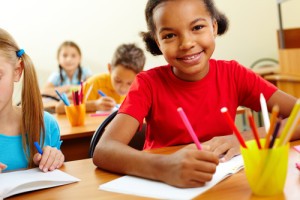 Sherrie Gahn told Ellen that a large number of the students at Whitney Elementary School are homeless.

“They were going to go home and make ketchup soup with it, because they had no food,” she said.

Sherrie said that she wanted something better for her students. She wanted them to be able to have new backpacks, new clothes, presents at Christmas, and cakes on their birthdays.

Heartbroken by how miserable her students’ lives were, Sherrie decided to do something about it. She started collecting donations from the community to help the school out.

Taking even further action, Sherrie said she started calling each student’s parents and trying to work with them to improve her students’ lives. She even went so far as to use personal money to help pay some of those families’ bills.

The video showed testimony from countless people stating how amazing Sherrie has been for their community.

One child said, “We were about to lose our house and we didn’t know. She paid almost every single bill.”

One mother said that her sun needed glasses and Sherrie “took care of that.”

Ellen was so amazed by Sherrie that she invited her on the show.

Ellen said she couldn’t believe that Sherrie used her own money to help her students’ families pay rent and bills, and that she helped them get free doctor’s appointments, free glasses, and free dentist appointments.

“It can be overwhelming, but when you see their faces and you see the hope that you’re giving them…it gives you the energy to move on,” Sherrie said.

Sherrie said that when she gets really bummed, she watches episodes of Ellen on her TiVo.

Sherrie said that she had been raised in the projects, but was always optimistic.

“I always had that hope,” she said. “My mother instilled that in us that there was hope for a better tomorrow.”

“There’s no denying what an amazing human being you are,” Ellen told Sherrie.

Ellen was so inspired by Sherrie’s story, that she decided she wanted to help her. She talked to her friends at Target and they said they wanted to help too.

“When i told target what you were doing, the people at target said ‘Well we wanna do something too,'” she said.

Then Ellen pulled out a giant check for $100,000, written to Whitney Elementary School.