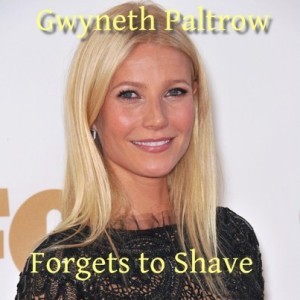 Ellen invited Gwyneth Paltrow on the show to talk about being named the World’s Most Beautiful Woman and she told an embarrassing story about a sheer dress.
(Image credit: Jaguar PS, Shutterstock.com)

Gwyneth Paltrow was named the World’s Most Beautiful Woman by People magazine the other day and she said when she found out, she literally did not believe it. She said it was “rad” to be given the title, especially since she is a mother of two in her 40s.

The day she found out about being named the World’s Most Beautiful Woman, Paltrow said she got an email from her publicist but she thought he sent it to the wrong person. She said it was very “psychologically interesting”  because she really thought someone was playing an elaborate joke on her.

“I talked with my shrink about it,” she added.

Well she better start believing it soon because Ellen celebrated with Paltrow by bringing out some male strippers to dance on her. Check out the video below for some man candy.

Chris Martin, Gwyneth Paltrow’s husband, is probably excited his wife was named the World’s Most Beautiful Woman. The couple is about to celebrate their tenth wedding anniversary this year and Paltrow seemed pretty excited about it.

She said he is one of the best fathers alive. He is super responsible and he is great with the kids. She said he has been watching them a lot since she has been doing so many talk shows lately.

Gwyneth Paltrow’s Son Growing Up To Be a Rapper

Gwyneth Paltrow said both of her children, Apple, 9, and Moses, 7, are very musically talented. Both of the children know how to play guitar, violin and sing, and her son is really good at playing the drums and he loves to rap. She told Ellen her two children and another child from around the neighborhood have even started a band together.

“This thing about my son is he has perfect pitch,” Paltrow said. “If you ask him to sing a song, he will sing it in the right key and he just turned seven.”

But he may be leaning towards a career in rap rather than following in his father’s rock and roll footsteps. Paltrow said this past week she got a note from Moses’ teacher saying the entire class had sang her “Happy Birthday” and as the song ended, Moses leaped into a freestyle rap while everyone listened.

Gwyneth Paltrow finally got to put on the Iron Man suit for her role in Iron Man 3 and she loved it. Although Don Cheadle and Robert Downey Jr. have been complaining about how hot the suit is and how difficult it is to wear, Paltrow said it was not that bad.

“It wasn’t like wearing yoga pants but it isn’t as bad as the boys make it seem like,” Paltrow said.

Paltrow said before she made it to the red carpet, the dress was already causing problems for her. She said she was on set somewhere else before heading to the premiere so she had to change there. While changing into the dress she realized she couldn’t wear underwear with the dress but had forgotten to shave the night before.

“Everyone went scrambling for a razor,” she said. “I went from being the World’s Most Beautiful Woman to the world’s most humiliated in a single day.”

Gwyneth Paltrow told Ellen she feels truly blessed to be able to travel with her children. She said right now they are going to school in London but she tries to stay in the states as much as possible when she isn’t visiting them. Being able to expose her children to different experiences and cultures around the world is one thing she truly loves about her life.

Gwyneth Paltrow’s newest cookbook, It’s All Good, shot to the top of the New York Times bestseller list and she seemed very proud of herself. When Ellen asked what people can expect from the cookbook, Paltrow described the book as “comfort food that is a little bit healthier.”

Ellen heard Gwyneth Paltrow and her husband, Chris Martin, love playing a game at home where they try to impersonate the singers they hear on the radio. Ellen wanted to be a part of the fun so she held up photos of famous musicians and Paltrow sang songs so Ellen could guess who the picture was of.

Although Paltrow said singing on TV was hard for her, referring to it as being in hell, she actually did a really good job with the lyrics. She knows a lot more rap songs than you would think. You can check out her singing voice in the video below.