Ellen gave the inauguration speech for Steve Harvey’s star on the Hollywood Walk of Fame. It was touching and full of comedy. 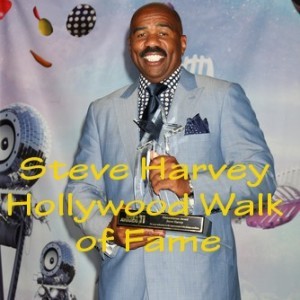 Ellen spoke at Steve Harvey’s Hollywood Walk of Fame ceremony and then grabbed his butt during the photos. He’s also up for two Daytime Emmys. (Helga Esteb / Shutterstock.com)

“This is not just going to be a bunch of jokes about your mustache,” Ellen said, before saying she didn’t want the humidity to frizz up Harvey’s mustache.

She went on to praise his support of women and his dating advice books, which she enjoyed but didn’t help her snag a fella. Steve said that what we didn’t see was Ellen grabbing his butt in between photos. She said it was in order to make him smile.

“And then you said, ‘it wasn’t me, it was Dr Phil,'” Steve Harvey laughed. Dr Phil was also on hand for Harvey’s inauguration.

Not only did Steve get his own star on the Walk of Fame, he’s nominated for Daytime Emmys for his talk show and for Family Feud. He hopes he wins because otherwise the camera will catch him being a sore loser.

Steve Harvey’s favorite part about having a television show is helping his audience with “Ask Steve,” his opening statement. He mixes advice with comedy to make the “medicine” taste better.

“It can’t be castor oil, it has to be bubblegum Triaminic,” he said.

Half way through the segment, Harvey felt that he had too many shirt buttons open. He made a small show of buttoning his shirt up, so Ellen jumped up and unbuttoned it all the way.

“I don’t know why I come on your show and let you do what you do to me,” Steve said as he buttoned his shirt.

Steve Harvey has had his mustache since college. He said his father told him myths to make mustaches grow better and fuller, but they never worked. Such as, brushing the hair backwards with a toothbrush to stimulate growth.

“All of the energy and love goes to this top lip area,” he said.

Steve once had to shave his stache, when he was pledging a fraternity in college. He regrets that decision to this day because his top lip looked so huge.

Another fashion moment for Harvey was when he was first starting out. Harvey said he bought a pair of shoes that he loved and had to put them on lay away for eight months. By the time he got the shoes out, they didn’t fit anymore. They cost him $14. He payed it off dollar by dollar.