Bethenny Frankel has been on Ellen too many times to count. They really have been together from the beginning. Everything from crafts and cooking to exercises to starting her own talk show, this is a really special time for Bethenny Frankel and Ellen is riding shotgun.

Bethenny was shocked when Mario Lopez brought out some champagne for them to toast to Bethenny’s new show. The crowd enjoyed the sight immensely and Bethenny said he brings yummy champagne. 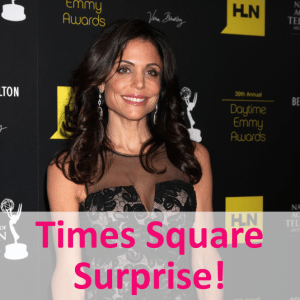 Ellen is so excited for Bethenny. She brought her over to film promos for the show and she decided to give the promos a little edge. Bethenny was terrified and jumped a mile in the air. I think they should keep that for the show.

What Will Bethenny Frankel Cover on Her Talk Show?

Bethenny said that she wants to blend her life and media coverage on her talk show. She plans to talk about mommyhood and marriage, the things that she and her friends are going through. She also wants to cover pop news, like Kim Kardashian’s pregnancy. “It’s the first time she’s really relatable,” Bethenny said that Kim may not think this is a great time in her life, but really it is in the long run. The public is seeing her just like everyone else. Bethenny said she’s also interested in what Justin Bieber is doing. People have to sign a confidentiality agreement before they enter his house. Any person has to sign, family and friends included. Paranoid much? “I tell baristas at Starbucks they have to sign a confidentiality agreement,” Bethenny joked.

Before she starts being a full time TV host, Bethenny plans to have a relaxing and energizing summer. She wants to take mommy and me trip with her daughter, Brynn, and bond some with her. She also is going to get into meditation and yoga. Ellen said that she’s going to need it. Maybe some more of that Mario Lopez champagne first.

Ellen is helping Bethenny with her talk show, promoting and decorating. Ellen gave her a framed picture of Bethenny and her from the show to start out her own celebrity friends photo collection. Bethenny was tickled, but then Ellen mentioned billboards. Billboards? There’s a budget for that? When Ellen is in charge of making your talk show, there will be billboards.