After eight years as Tony Soprano’s wife in The Sopranos, Edie Falco didn’t get much of a break. Now she is a nurse battling addiction in the Showtime series Nurse Jackie.

In the fourth season, it looks like Jackie might finally be heading to rehab, based on the clip Ellen shared. The actress joined Ellen for an update on her character and the new season. 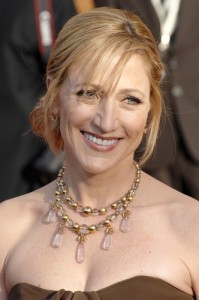 Ellen noted that Edie Falco has been very busy since her last appearance on Ellen several years ago. She has overcome breast cancer and even adopted two children, so it’s obviously been awhile.

Now, her children are ages 7 and 4, but she adopted them both when they were newborns. Even though she thought it wouldn’t happen to her, she said that her kids are all she ever wants to talk about these days.

She doesn’t plan on having more kids, but she said she can’t completely rule it out.

Ellen recalled Edie’s role on The Sopranos, saying she thinks that Edie picks great roles and projects. Ellen asked what the actress misses about her old show.

“I miss all my friends. You feel really sort of established in a community,” she said of her role as an Italian matriarch. “It couldn’t be more different from my real life. There’s something about that family thing that I do miss, for sure.”

She still keeps up with some of the crew from the show, and others whom she sees on the streets of New York City. Her former TV husband has a real life now, she says, and she can’t help but compete with his real life wife.

Edie Falco plays a drug addicted nurse on the Showtime series Nurse Jackie, which is kicking off its fourth season. Falco herself has been sober in real life for 20 years.

Ellen asked how her role crosses paths with her real life struggles.

“I’m sure you could play an addict without having been one,” she said. “But it is a mindset that is very peculiar and very specific to sick people. I know what it’s like to want something that’s bad for you.”

Ellen wondered if she has any input into the script, but Edie Falco said she trusts the writing staff to give her great material.

The show’s fourth season kicks off Sunday April 8 2012 on Showtime.

To wrap up the show, Ellen DeGeneres went outside the studio with LSU’s Mo Isom. She shared her motto with everyone.

“The only thing more dangerous than allowing others to put limitations on what you can achieve is allowing yourself to believe them,” she said.

Mo lined up to kick her field goal, and did great under the pressure, succeeding on the first try. For good measure, she made a second successful attempt. This woman has a great shot at the LSU team, and hopefully Ellen will follow her story.