Ellen showed a picture of a crane that is hanging right above Washington’s apartment. He said it is scary looking at it hanging there and has no idea when they will get it down on the ground.

Washington said he started acting when he was 20. He said he had tried everything else, but he wasnt good at anything else. He started with pre-med, then went into pre-law, then into journalism and finally he ended up trying out for a part in Emperor Jones, which he got. Next thing he knew he was on Ellen. 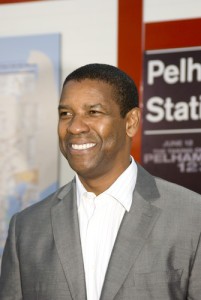 Denzel Washington stops by Ellen to talk about his new movie Flight, the beginning of his career & being named #1 actor to play jesus in a new poll. (Elizabeth Wu / Shutterstock.com)

Washington said his mother had a friend about 30 years ago who predicted he would travel the world and talk to millions of people. Washington said she was known around the town to have this ability at predicting the future.

Ellen asked why he didn’t get more advice from her. He said she passed a long time ago. Ellen bet if she was still around she would predict Washington is going to win an academy award for his performance in Flight.

Ellen: Who Should Play Jesus?

There was recently a pole asking people who they would want to see play Jesus and Washington was the number one choice. He was followed by Daniel Day Lewis, Al Pacino, Ryan Gosling and Woody Allen.

That’s how Hollywood should be. No more agents. Just mothers working out deals.

Elen said the movie Flight has a 12-minute crash scene, but it is not the main issue being dealt with in the film. The film focuses on a pilot struggling with addiction. Washington said he had to play a character that was drunk quite often and he said the trick is to not act drunk, because a drunk is always trying to act sober.

Ellen even showed a clip of a guy who was so drunk he couldn’t get his sandals on his feet. I hope Washington’s character is not as drunk as this guy. He could hardly stand, let along fly a plane.