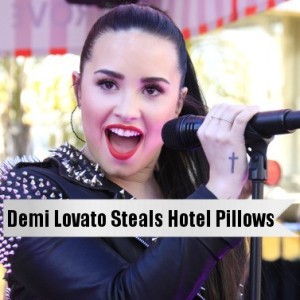 Demi Lovato told Ellen that she likes to have a clean hotel pillow with her on long planes rides. She often steals them from the Ritz. (image credit: Joe Seer / Shutterstock.com)

Demi Lovato said that her hair was a lot darker the last time Ellen saw her. In fact, it was a lot darker just a week ago. Demi recently dyed her dark brown locks a very summery strawberry blonde. The color suits her, but she looks best as a brunette. She said that she is bipolar and likes to switch up her hair a lot.

People’s Most Beautiful recently named Demi on their list. She looks happy and healthy, especially after a rough few years. She’s struggled with body image, bullying and her bipolar disorder throughout her life. The last few years she has been seeming stronger and stronger.

Maxim named Demi Lovato number 26 on their Hot 100 list. She said she doesn’t like to show a lot of skin and it feels a little weird to be in the magazine.

“That list isn’t just about the most good looking, but it looks at who has the most projects coming out,” she explained. Clearly, both apply to Lovato.

Demi said that a lot of girls have told her that she has helped them. She can’t even put it into words how much it means to help young girls. Ellen said she really admires Demi Lovato. She teaches young women that you can get to a place in life where things get better.

Demi is heading back to X-Factor soon and Ellen doesn’t understand. The show starts filming next month and Ellen wants to know who the rest of the judges will be.

“If I don’t go back, who’s going to mess with [Simon Cowell]?” Demi Lovato said.

She said that she would love to have Katy Perry, Cher or Lady Gaga. She has only heard a few people and can’t reveal who is coming on to the show.

Demi said that flying is very tricky. She never knows how she will be able to sleep on the plane, so she takes a giant pillow with her everywhere she goes. She said the pillow is always clean, mostly because she steals it from the hotel she stays at. It starts out as her pillow, but then she leaves it at the hotel and takes a new one.

“They’ve got money, they can afford another pillow,” Demi reasoned.

Ellen gave Demi a special pillow and pillowcase with pictures of her and Ellen on it. Ellen said that if she carries it with her on trips Ellen will tweet her everyday. Challenge accepted, Demi said.

If you weren’t obsessed with Demi Lovato before her song “Heart Attack,” then I’m sure you are now. This is a real girl, singing about being a warrior of love. It’s not Taylor Swift, singing about having a million men and throwing them to the curb. This is Demi, a real girl struggling through life the best she can. That is really the best way to describe Demi Lovato: warrior.

Also, her new blonde hair looked fabulous as she tossed it around and gave the camera power stares. Demi comes out May 14.