Ellen showed a clip from November 2011 where she mocked Sofia Vergara’s accent, on the way to a Cover Girl commercial shoot. She expressed weariness at Sofia’s act, in which she pretends not to understand English or know what’s going on around her. That would get annoying, even if she was just trying to be funny. 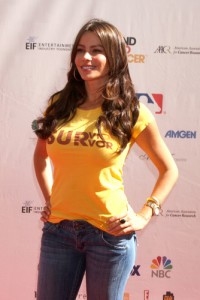 On the set, Sofia was waiting for Ellen to arrive and reflecting on their co-starring roles in the commercial. Cover Girl’s motto is “Easy, Breezy, Beautiful,” and Sofia said that she is the easy one, while Ellen is breezy.

They seemed to have different memories of how that commercial went, with Ellen complaining that she had to teach Sofia everything. But Sofia thought they went together like two peas in a pod, or Cafe con Leche.

“Coffee is dark and rich, and leche (milk) is bland and colorless, but they need to be together,” Sofia told Ellen. As Ellen processed that she was being insulted, the audience roared with laughter (at least the parts of it that could follow what Sofia was saying). She said in the right combination they make a delicious drink. Ellen wasn’t sure what to make of this backhanded compliment.

Ellen DeGeneres earned her paycheck by praising Cover Girl’s new Tone Rehab 2-in-1 Foundation, and showing off the commercial she and Sofia Vergara shot together. It was a charming ad, and despite Sofia’s attitude, they do seem to get along well. Watch the Cover Girl Commercial on YouTube.

At least the commercial is based in the reality that Sofia’s accent can be hard to understand, and it’s clear, especially in her role on Modern Family, that they are playing it up to be deliberately confusing.

Ellen said they decided after spending all day making a commercial that they should make a comedy movie together. The world does need more female buddy comedies, and this could be a great time to get in on that.