Dax Shepard came by Ellen to talk about the end of Parenthood. Dax Shepard saw Ellen at the People’s Choice Awards and he said it’s always very flattering when Ellen says hi in public. He said whenever he sees her he thinks she’s going to pretend she doesn’t know him. He said Ellen is “the thing” wherever she goes. 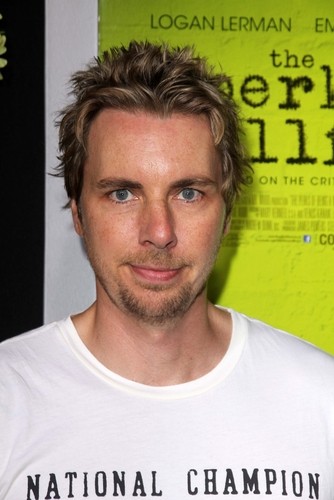 Dax Shepard came by Ellen to talk about the end of ‘Parenthood,’ his new baby Delta, and his unrequited love for Brad Pitt. (s_bukley / Shutterstock.com)

Dax Shepard’s new baby is only three weeks old. He joked that she’s a “micro-baby” and is only the size of his thumb. “Less milk, smaller poops, but you will lose them in your pocket,” he joked.

Her name is Delta. This is his second child and he said it wasn’t easier the second time around. His wife, actress Kristen Bell, was in labor for 33 hours. For their first child Lincoln, Kristen was in labor for 15 hours, which Dax said was “child’s play” compared to this.

“She got an epidural like hour 14, as you should, and I think dads need something. I deserved something. Because I was along for the ride and it’s still a car crash and I’m in the passenger seat. I’m playing Katy Perry and I’m breathing and I’m rubbing her back and I have fatigue and I think, ‘I need something for this, help me,'” he said.

Near the end of the labor, she had to have a C-section. The baby ended up being healthy, so it was fine. But Dax said everyone warned him not to watch the baby come out. But no one warned him about looking when the C-section happened. He said that was way worse. He said when he peeked around the sheet, he saw his baby, which was great, but then he noticed his wife was “completely disassembled”. He saw her liver and intestines. He said he’d rather see the baby come out the other way.

“Guys, I need medication if this happens again,” he joked.

Kristen has never smoked or drank and eats perfect, so Dax called her a “super-healer”. He said she’s like Wolverine. “If those kids came out of me, I don’t know what they would look like,” he said.

“Well, it’s a good thing they didn’t, because that’d be weird,” Ellen joked.

Dax Shepard’s firstborn Lincoln, a girl, has a good relationship with baby Delta. But Lincoln had some rocks she loved and carries around. She was throwing them in the baby bassinet to share with Delta. They were big rocks, but there were no injuries. Dax and Kristen were both terrified at first.

“Sharing is not caring always. They say it is, but guess what? Sometimes it’s almost murder,” he joked.

The name Delta for his new baby actually happened because a friend joked with him that Lincoln was such a masculine name for a girl. Dax’s friend joked that he should name his next child Delta Force. When Dax read the text to Kristen, they both agreed Delta was a great name.

But Kristen was mad because Dax came up with both names for their kids. Dax said a lot of people wonder why famous people name their kids such weird things. Dax said his own parents named him Dax, which is why worse than what he named his kids, and his parents weren’t famous.

Dax Shepard said that he and Kristen wear matching outfits from November 20th through January 8th or 9th. Kristen orders all the stuff. He said the outfits come by the dozen, so they have enough for the dogs, the children, themselves, and visitors. Dax said Ellen should arrive unclothed so he could give her one of the matching outfits.

This is the last season of Parenthood and Dax said they’ve already finished filming. He said it hasn’t hit him yet, but he thinks it’ll hit him in a few months at a grocery store.

“It just keeps getting better. I don’t know when it’ll stop, but I hope I’m not alive to see it,” he joked.

Dax Shepard is writing and directing the CHiPs movie and he said he’s hoping to cast Brad Pitt as “Bad Guy #1” in the movie. He said if they can’t be best friends, maybe they can have a professional relationship.

Ellen gave Dax Shepard a number of CHiPs-style uniforms that all matched, just in case Brad Pitt was on board for the movie and dropped by around Christmas. That way, they could all dress the same.