Though How I Met Your Mother is getting ready for its summer vacation, you won’t have to miss Cobie Smulders over the break.

That’s because she is one of the stars of the summer action comic book flick The Avengers. Cobie’s outfit for her Ellen interview was a combination skirt, blouse, and dress. 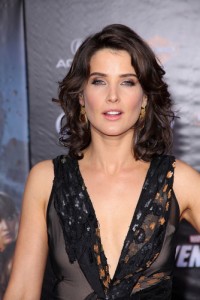 If you think Cobie Smulders is a weird name to spell, wait till you find out what The Avengers star's full name actually is. (Image Credit: s_bukley / Shutterstock.com)

Cobie revealed that her full name is Jacoba Francisca Maria Smulders, and I thought her current name was hard to spell. She said that she is named for her father’s favorite aunt, who was the first to have the nickname Cobie.

Cobie said that she believes the double middle name is a European tradition, and all her siblings share it. Her father is of Dutch descent.

“I don’t understand why you need two,” Ellen said. “We don’t even use one. It’s a waste of letters.”

Cobie is getting married this fall, and will be tacking on the surname Killam. Her wedding is slated for September, and her fiancee Taran Killam is an actor on NBC’s Saturday Night Live.

“My driver’s license is going to be like a scroll when I’m done with it,” she said.

The couple has been together about eight years, and they already have a daughter, Shaeyln Cado, who’s turning three on May 14. Kado means gift in French and Dutch, and in this case the gift might just be the one middle name.

Cobie called her daughter “a lovely surprise” and said that they feel ready to plan the wedding now. She said she will work the wedding into her shooting schedule for the next season of How I Met Your Mother.

Cobie is excited about her role in this movie version of The Avengers, directed by her friend Joss Whedon, who’s best known for his cult TV shows like Buffy the Vampire Slayer, Angel, Firefly, and Dollhouse.

“I did a lot of training,” she said. “I’ve never played an officer before. I’ve never even shot a gun before.”

She worked with a guy who actually trains SWAT teams, which has got to be terrifying, especially since he showed up at her house bearing a bag of weapons.

They practice loading and holding weapons in her guest room while her daughter was asleep.

Cobie also went to a shooting range near LAX, and she said she was terrified being in a cement room full of people with guns, especially since she found the security so lax. Ellen said she had to learn to shoot for a movie, and she felt it improved her focus.

For her part, Cobie said that target practice made her think about focusing on her breathing.

Cobie said she loved working with Robert Downey Jr in The Avengers. She said she was nervous around him because he’s so handsome. He’s been playing Iron Man in some recent films and she said he was gracious about welcoming her to the action movie fold.

You can see them both in theaters when The Avengers opens May 4 2012.

After he spent the hour announcing her show, Ellen DeGeneres sprang a huge surprise on 14-Year-Old Voiceover Artist Jake Foushee.

Jake’s voiceover idol was Don LaFontaine, and you are sure to know the man’s voice, even if you don’t recognize the name. He did movie trailers for decades before passing away in 2008.

To help Jake Foushee continue to pursue his goals, Ellen set him up with the Abrams Artist Agency in New York City, and they’ve agreed to sign Jake as a client. Good for him; you could be hearing his voice on a movie trailer near you.