As Charlize Theron, Prometheus star & new mom, walked onstage, her appearance was perplexing. Despite her stunning figure, she wore an entirely unflattering dress that looked like a rug that had been rolled up and outfitted with sleeves. Furthermore, she usually has beautifully wavy hair, but she, for some reason, straightened it, which made her look less vivacious than usual. 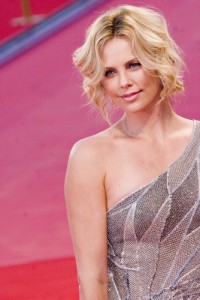 The last time Charlize was on the show, she had just adopted two puppies, one of which was a pit bull. This time, she had just adopted a baby boy. Despite popular misconception, her child is from the U.S. Ellen asked Charlize if she was at all apprehensive of raising a child in an environment with two dogs, especially since one of them was a pit bull.

“I knew the dogs for a little bit before the baby came into the house,” Charlize explained. “I was raised with dogs so there was also just a natural feeling that.”

Charlize said the dogs have been tremendously affection toward her baby.

“This was the most beautiful thing I think I’ve ever witnessed,” she said. “From the moment the baby was brought in the home, those dogs have never been more madly in love.”

“The pit woke up with me for every feed, every change,” she said.

The child was nine days old when Charlize brought him home, but Charlize had been going through the adoption process for nearly two years.

“My mom said the most beautiful thing,” she said and quoted her mother saying, “‘It took me nine months to fall in love with you when you were in my stomach. It took you two years.”

Despite how long it took for her to adopt her son, Charlize said “It feels exactly how it’s supposed to feel.”

Ellen aired an exciting preview of Charlize‘s new movie Prometheus. Charlize said that the movie has director Ridley Scott revisiting the sci-fi genre he mastered decades ago with Aliens.

“It’s about a bunch of explorers going out into space to find out where we come from,” she said. “It’s probably not going to work out all that well.”

Charlize talked about her charity, the Charlize Theron Africa Outreach Project. The group raises money for HIV/AIDS prevention in South Africa, her home country. Charlize said despite that there is a lot of funding for HIV/AIDS treatment in Africa, “there’s very little for prevention character.” She said it’s especially important to teach people in South Africa how to protect themselves from the virus.

Charlize said that donations to the fund can be as little as $10 and that all donations “go so far in helping these kids.”

Ellen told Charlize that she had a gift for her. Charlize looked very excited as Ellen pulled out a baby-sized mock spacesuit, complete with a helmet.

“Oh my god–that is so cute!” Charlize said as Ellen handed her the suit.

On the back of the spacesuit, her new movie Prometheus was advertised with its June 8th opening date.

“There’s nothing wrong with my son promoting my film,” Charlize said jokingly as she ran her fingers across the back of the spacesuit. “Prometheus, June 8th.”