Charlie Day came by Ellen to talk about the new season of It’s Always Sunny in Philadelphia. This was his first time on Ellen, but it wasn’t his first time meeting Ellen. He met Ellen at a party at Jennifer Aniston’s house. Charlie said that was the most star-studded party he’d ever been to. The first person he saw was Tom Cruise, then he saw Ellen and Jen and Demi Moore. Charlie said he and his wife brought a bottle of wine, but then they decided to hide it once they walked in, because that wasn’t the right type of party. 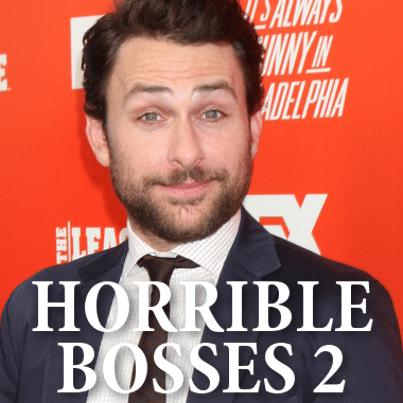 Charlie Day came by Ellen to talk about the new season of his hit show ‘It’s Always Sunny in Philadelphia’ and working with Jennifer Aniston in ‘Horrible Bosses 2.’ (Helga Esteb / Shutterstock.com)

Charlie said he couldn’t recall what he and Ellen talked about because he was so drunk.

“I think we went out to a car and listened to some music, somebody was playing something in the car for us,” Ellen said.

“Do you really think that happened?” Charlie Day asked.

“Maybe you’re not who I’m thinking of,” Ellen said.

“Maybe not. Absolutely, we listened to some fine music,” Charlie Day said, being polite.

Charlie Day said that it’s great working with Jennifer Aniston in Horrible Bosses 2, but it’s strange because it’s not the way she normally talks. Charlie said he gets a kick out of it. He also added she’s very sweet and it was nice working with her twice.

Ellen said Jennifer will send her pictures of the dialogue she has to read and sends it to her because what she has to say is so horrible and disgusting.

It’s Always Sunny in Philadelphia is the longest running comedy on cable. Charlie Day said the show started because he kept auditioning for things and getting notes like, “He’ll work in comedy.” So he and his buddies just decided to make a show themselves. They filmed a scene about a guy who goes to his friend’s house to borrow sugar and his friend tells him he has cancer. The guy feels sorry for his friend, but he also really wants the sugar. That’s the sensibility that It’s Always Sunny started with.

Charlie Day’s son is now 3 and he’s brutally honest in this phase. He said when they took his son back to school after going home for the holidays. When his teacher asked him how his vacation was, he said, “It was good. I got to go on a airplane and I saw a movie.” Then he pointed to his mom and said, “And she drank wine!”