Bethenny Frankel returned to Ellen for some more frank, funny, and inappropriate fun! Bethenny had just hit a very exciting milestone: her one millionth Twitter follower! Bethenny (@Bethenny) loves Twitter, and she’s very excited to have so many followers. However, she said that the truly important Twitter follower is the very first one, who supported her before all of her success. 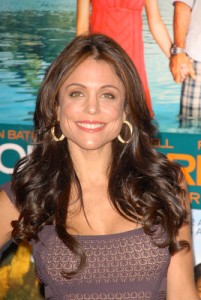 Bethenny Frankel appeared on Ellen September 24 to talk about her two-year-old daughter, Bryn, and play “Would You Ever?” with the Ellen audience. (s_bukley / Shutterstock.com)

Bethenny remembers fondly the first time that Ellen tweeted her. She was out to dinner with her husband, Jason, and flipped out when she received the tweet on her phone. Ellen said that she just wanted to let Bethenny know how much she liked her and enjoyed watching her on television. After that first tweet, lots of amazing things started happening for Bethenny!

Bethenny does tweet “mundane” things a lot of the time, but she also enjoys using Twitter to chat with fans and learn from them. She has received many great parenting tips from fans regarding her two-and-a-half-year-old daughter, Bryn.

Bethenny Frankel: Bryn and “The Biebs”

Speaking of Bryn, Bethenny was super-excited when Bryn recently got to meet Justin Bieber. Bryn now refers to Justin as “The Biebs;” at least, according to Bethenny, she does. Ellen doesn’t believe her, so Bethenny brought proof. However, whether or not Bryn really said “The Biebs” is debatable!

Bethenny Frankel: “Would You Ever?”

The first “Would You Ever?” was: would you ever read your boyfriend’s text messages without him knowing? An audience member, Bridget, did just that; and what she found meant that she and her boyfriend are no longer together! What about, would you go out for a date with a cop to get out of a ticket? One audience member said “definitely”– and her husband wouldn’t mind, either!

What about this: would you ever date someone that your friend has dated? Ellen said that it depends how the relationship broke up. Nancy revealed that she had dated her friend’s ex, and her friend was actually sitting right next to her! However, they had only dated for less than a year, and it was a high school relationship.

For more “Would You Ever?” questions and light-hearted fun, keep an eye out for a new season of Bethenny!