Ellen DeGeneres and guest Bethenny Frankel announced that she is launching a new talk show this summer. Ellen is helping her produce the series.

Bethenny said Ellen has been very encouraging and supportive through the process of developing the show. “You’re going to be great, because I think you talk about a lot of stuff that a lot of women can relate to,” Ellen said.

Bethenny Frankel’s new talk show will have a six-week test run in summer 2012. 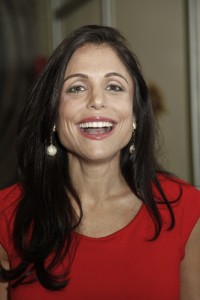 In the new season of her reality show, Bethenny’s friends and family pressure her to have a second child. Ellen asked Bethenny why she decided to speak out about her recent miscarriage.

“I didn’t know that so many women have gone through that,” Bethenny said. “The only reason I had brought it up was because I had been asked so many times, ‘When are you having a second baby?’”

She said there are many complications that come into play as women approach 40, when it comes to childbearing. Bethenny said she was eight weeks pregnant when she miscarried.

Bethenny was very emotional about going through this, but she said talking about it makes you and others feel better about the experience.

Ellen cited this as an example of how open Bethenny is when it comes to talking about important issues and life events.

“Not everybody can afford therapy, but everybody has girlfriends that they can talk to,” Bethenny said. She noticed that as she got married and had a child, she learned a lot from her other female friends.

Ellen said she has been watching episodes of the new season of Bethenny Ever After. She asked Bethenny how having a new baby has affected her sex life with her husband, whom she says has “cobwebs on his penis.”

Bethenny said that they are busier now with the baby, and it does affect their time together. “You really have to make it a priority. You’ve got to make love in the club when we can,” she said.

Bethenny Frankel is an entrepreneur and reality star, with a line of books and Skinnygirl margaritas, among other interests.

Bethenny said she also feels a responsibility to her fans, to be open and honest with people who have supported her. She said her fans have even given her parenting tips.

Ellen said she feels like Bethenny knows a lot about a variety of topics, and can talk about almost anything.