It’s just been officially announced that Bethenny Frankel’s talk show, “Bethenny,” will return to the air for a brand new season. But until it does, she’s planning on appearing on Ellen as often as she can! Bethenny will use Ellen as her “home away from home,” and also test out a few of her own segments on the Ellen audience! Check out Bethenny and Ellen below, and keep reading for full details.

But before Bethenny headed up into the Ellen Show crowd, she revealed that she’s currently obsessed with dressing her daughter, Bryn, up for Halloween. So far she’s received lots of costume gifts, like a Chinese outfit from her in-laws and a Dallas Cowboy Cheerleader outfit from a fan. But, since Bryn’s stomach is exposed in the cheerleader outfit, she thinks “maybe it sends the wrong message?”

Bethenny is still looking for the perfect costume, but she didn’t want to give away any details. “It’s like the Academy Awards!” she explained. She doesn’t want any parents to steal her idea for their kids!

One of Bethenny’s favorite segments from her show is called “Let’s Go There,” in which audience members spill some of their darkest secrets. She had some fun and played the game with Ellen’s audience, taking the Ellen show to places it’s never been before! Take a look at Ellen’s audience playing Let’s Go There. 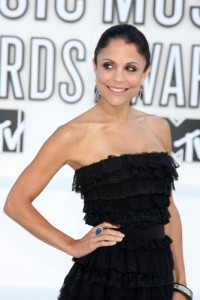 Bethenny Frankel and Ellen went there with the Ellen audience and played “Let’s Go There.” (Helga Esteb / Shutterstock.com)

First up was Amanda, who revealed that she had an affair with one of her teachers in college. She was taking his art class, and– surprise– she eventually received an ‘A.’ Bethenny also admitted that she began dating a Teaching Assistant around the time of finals while she was in college, and she got an ‘A,’ too!

But get this– Amanda and her former teacher are still together to this day! They live together, and are thinking of getting married. “She got the ‘A’ and the guy!” Bethenny said.

Bethenny on Ellen: Flashing Breasts & Sex At Any Age

Then, Bethenny and Ellen spoke with Lori, who admitted that she sometimes likes to flash her boobs while on vacation at her favorite destination in Parker, Arizona! She does it so often that she’s even developed a nickname that she can’t repeat on television. However, the funniest part of Lori’s confession was that her son was sitting right next to her, and he had no idea what his mom had been up to– how traumatic!

Finally, Susan revealed that she’s going on a 40+ singles cruise in December, and she really hopes to get laid for the first time in nine years! Ellen gave Susan a hug, because she (really) needed it. Susan is 57, and Bethenny was really proud of her for putting herself out there. She believes that there are many older people in Susan’s situation, and 57 is definitely not too old to have fun.

Her best words of advice for Susan? “Pace yourself, because it’s a seven-day cruise!”

Bethenny and Ellen had some more fun together when they dunked Dancing with the Stars hunk Maksim Chmerkovskiy in the Splash Tank. He looked pretty good in his Ellen underwear! To see for yourself, take a look below.