“Our next guest is a best selling author, entrepreneur, and she also happens to be my friend,” Ellen said to introduce her guest Bethenny Frankel.

Bethenny danced her way to her seat. She looked very casual and comfortable wearing a plain white tank top and blue jeans. When she sat down at her seat, she grabbed a copy of Ellen‘s book, Seriously…I’m Kidding, and teased, “This just happens to be sitting here?”

“Just in case you get bored and you want to read or something like that,” Ellen said.

Ellen mentioned that Bethenny was recently stranded at sea. “I was lost and stranded,” Bethenny said. 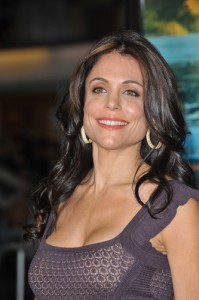 Apparently, she and her husband, Jason Hoppy, were told to go on the trip by their therapist. “My therapist suggested that we go on a team building for our marriage,” Bethenny said.

“I don’t know why anybody would lock you on a boat with beans,” Bethenny said.

Bethenny said that the first part of the boat trip went fine but then, she said “eight hours in, we get in this waves that hits us and we go flying.”

“Jason‘s sleeping the whole time as any good husband does,” Bethenny said.

At that point, Bethenny and her husband were stuck in eight foot water, which is far too shallow for a boat of their size, their GPS was broken, and they had to call the Coast Guard.

“It took us 21 hours until finally this towing company that the Coast Guard called, towed us in,” Bethenny said.

“Could you see land?” Ellen asked.

“No,” Bethenny said. “We were just sort of hysterically calm. It was just really one for the books.”

Apparently, the guy who towed Bethenny‘s boat in told the media after the incident that she didn’t tip him. Bethenny said she tipped him 30 percent. In any case, she said she was so grateful for his help that she would’ve given him an even greater gratuity.

“I would’ve slept with him,” Bethenny said. “I would’ve had sex with him.”

“I wouldn’t have done that,” Ellen said.

“We tipped him 30 percent,” Bethenny said.

“Bethenny is going to help a fan with some shopping tips!” Ellen said.

Bethenny assured her, “All of these outfits are under $80.”

Bethenny showed a number of expensive outfits and accessories, many of which were over $1,000, and then showed comparable counterparts from more affordable stores. Most were less than a tenth of the price of the expensive items.

“If you walk really fast, no one sees which one it is,” Ellen said.