Ellen DeGeneres gave a sneak peek at this summer’s relaunch of the Spider-Man movies, featuring Andrew Garfield as the new Spider-Man. Is vigilantism finally catching up to Spider-Man? You’ll have to hit the theater this summer to find out.

Andrew Garfield sat down with Ellen to talk about his personal life, before delving into his hotly anticipated film project. Andrew Garfield said he is originally from LA, but was raised in England from age 3. He’s only been back in the US for the last few years, and it seems like he’s been busy with acting roles the entire time. 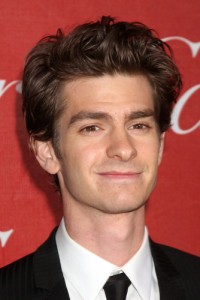 Ellen: Andrew Garfield Wanted To Be A Gymnast

Before getting into acting, Andrew’s life goal was to be a gymnast. But around age 11, he came to the realization that it wasn’t for him when he passed out and came to with an overweight man on his back. That would discourage me too, though he didn’t really tell enough of the story to give it any context.

“Nothing about that sounds right,” Ellen said.

Ellen: Andrew Garfield Death of A Salesman on Broadway

But Ellen pointed out that acrobatics and athleticism would come in handy for his Spider-Man role. Ellen said she loved Andrew’s work in The Social Network and Never Let Me Go. Now he’s on Broadway in Death of a Salesman. But he took a day off from his first Broadway gig to visit Ellen’s show.

Andrew said he’s lucky to be on Broadway, but he avoids the reviews of his performance. He said that it’s hard to stay away from the press and reaction, because you do care what people think of your work.

Ellen asked Andrew Garfield if everyone from England is a terrible driver, or if it’s just DJ Tony. Andrew didn’t speak for everyone, but he admitted that he’s a bad driver and parker. He drives slowly, and he said he can’t multitask in the car unless he’s listening to hip hop.

Andrew said that his hip hop favorites include Nas and his song “One Mic,” which he got into during his work on Spider-Man.