Amanda Seyfried Smolders on Red Carpet & Obsessed with Her Dog

Despite her composed red carpet smolder and her ditzy appearance in Mean Girls, Amanda Seyfried is pretty hilarious. She wore a simple black dress for Ellen and joked about her home life, her relationship with her dog, and losing weight.

Amanda Seyfried Tries to Top Rapping With a Joke 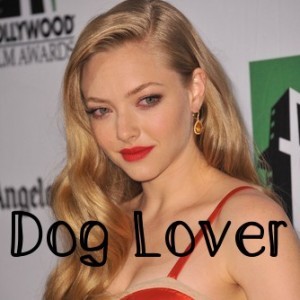 Amanda Seyfried loves her dog, Finn Seyfried, more than anything else in this world. Ellen made her relive her days as a book cover model. (Featureflash / Shutterstock.com)

Amanda was on Ellen back in December and she did a hilarious rap. Ellen wanted her to top it with something equally awesome, but she had problems coming up with something.

Anne Hathaway was the one that spread rumors Seyfried could rap. “When I’ve had a few drinks in me and I’m in Japan, sure,” Amanda told Ellen.

Somehow, Amanda ended up in a frog prince hat rapping. After the taping, Hathaway sent her a picture of a cat wearing the same hat. Amanda thinks she may have started a trend.

“Why did the police office smell bad? Because he was on duty,” Amanda said.

Amanda Seyfried Loves Her Dog Finn More Than Her Cats

Amanda Seyfried is a big animal lover, and there is no animal she loves more than her dog. Finn Seyfried, who has his own hilarious Twitter account, is a fun loving, energetic dog that Amanda can’t get enough of. Their relationship is closer than any dog and human could be.

Finn is Seyfried’s first dog, which explains why she is so close to him. She likes to take Instagram photos with Finn. He’s often balancing things on his head or posing with Amanda. There was one, very intimate, fireside photo that Amanda claims was a joke. Their nose touching looked pretty serious to me.

“I’ve got to stop doing selfies with him,” she thought out loud. Ellen gifted Seyfried with a romantic canvas of her and her dog by the fireplace.

When coming to Hollywood, Amanda Seyfried felt that she needed to lose weight to fit in. She told Ellen that she wishes she hadn’t done that. She only lost 10 pounds, but it was all in her breasts. Amanda said she used to have Ds and lost a lot of her curves when she dieted.

Amanda is on the cover of Allure Magazine and it’s the “How to look good naked” issue. She’s actually the only person in the magazine not nude. She believes that more people should appreciate their bodies and not hate on their figures.

Amanda Seyfried said this new movie really makes you feel like a kid. She loved getting transformed into her character, MK, and seeing her run around in this fantasy, jungle world. EPIC opens May 24.

Something else that makes Amanda feel like a kid again: seeing herself on the cover of books. When she was 14 she went to New York and did some modeling. From there, the photos went on the cover of some books by Francine Pascal, The Victoria Martin series. She said she was young and it was exciting, but now they seem pretty mortifying.