Ellen DeGeneres welcomed actress Amanda Peet and noted that it’s been years since her last appearance on the show. Ellen’s show has since moved to a larger studio, but Amanda said it feels almost the same.

Amanda said hello to her daughters, Frankie and Molly, who were wearing green in advance of St. Patrick’s Day. Amanda explained that her husband David Benioff is a producer on HBO’s Game of Thrones, and it’s led to their family spending a lot of time in Belfast. 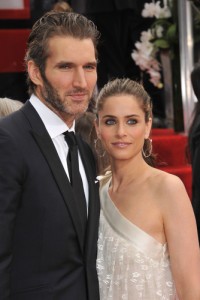 Amanda Peet told Ellen about spending time in Ireland while her husband works on "Game of Thrones." (Featureflash/Shutterstock.com)

Game of Thrones is an HBO drama TV series adaptation of a book series by George RR Martin. It is about to begin its second season on the pay cable network, and heavily features extreme violence and sexual content, as would seem to be the HBO mandate.

Her daughters spend time in an Irish daycare, and Amanda was worried that Frankie has caught the acting bug when she started picking up the local accent.

It has since faded away, but Amanda said she and her husband were concerned for awhile. This story led to Amanda and Ellen comparing their atrocious Irish accents, followed by their mediocre Indian accents.

Amanda had done an impression of her daughter’s Irish accent, which Ellen critiqued and then failed to best. After a few minutes of the ladies practicing Indian accents, Ellen settled into what she felt was an acceptable Irish brogue, and threatened to conduct the rest of the interview in this manner.

Amanda Peet has been popping up in TV shows and movies for almost two decades. Her latest project is the NBC situation comedy Bent, premiering Wednesday March 21 2012.

Amanda Peet co-stars with David Walton in NBC’s Bent, and she said he is handsome and funny, which is an unfair combination. “I do love my husband, but I mean, I really love my co-star,” Amanda said.

Ellen surprised everyone with an appearance by David Walton, Amanda’s co-star. She did seem genuinely surprised when he appeared, and the two immediately joked about going off together.