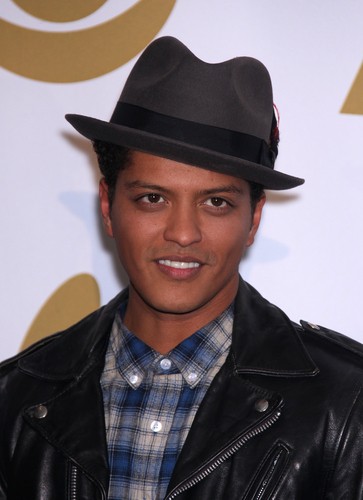 Adorable 6-year-old Kai Langer came by Ellen to talk about his baby sister and to perform “Uptown Funk” with his hero, Bruno Mars. (DFree / Shutterstock.com)

Still, there’s no denying his adorability. When he greeted Ellen, he told her he missed her because she was so beautiful and Ellen said that’s why she misses him, because he always gives her compliments.

Kai Langer has a little baby sister who is only 4 months. “One time she was laying on my chest and then I was talking to her and then she spit up in my mouth and I’m like, ‘Ahhh! Get it off!'” he said.

Kai Langer recently went to an air tube ride recently, the kind of ride where you go into it and the air blows so hard it keeps you flying in the air. Kai did this with a specially trained person who held him. He felt like he was flying like Superman. Ellen said she wanted to do that, too.

Kai Langer loves Bruno Mars and he really likes his new song “Uptown Funk.” He said his favorite part in the video was when Bruno Mars has curlers in his hair.

Ellen showed a video of Kai Langer dancing to the video. It’s funny watching Kai Langer dance because he throws his whole self into it with abandon. He’s not a good dancer by any stretch of the imagination, but watching him dance does bring a smile to your face.

Bruno Mars was on Ellen recently and Kai Langer got to meet him. The two of them sang “Uptown Funk” together on a couch backstage. Kai Langer knew every word, although he kind of stumbled over some of them. When they got to the chorus, Kai Langer was very excited about the “I’m too hot!” parts, but he was very shy around the “hot damns.” This might have been because his parents taught him that’s a bad word he shouldn’t say.

Ellen gave Kai Langer the same pink suit Bruno Mars wore in the “Uptown Funk” music video, as well as a little wig with curlers in it that he could wear. Kai Langer looked really happy when she put the wig on his head.