Singer Pink was a gymnast for eight years. She said that was her first dream and she wanted to be an Olympic gymnast. Ellen said Pink was tweeting this past summer about the U.S. Women’s Gymnastics team at the London Olympics 2012. Pink said she was so excited and so proud.

Ellen: Pink Gets A Surprise 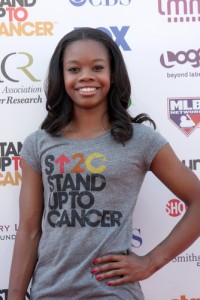 For a surprise to Pink, Ellen and Pink were joined by McKayla Maroney, Gabby Douglas and Kyla Ross, some of the members from the U.S. Women’s Gymnastics Team in London Olympics 2012. They brought their medals and Pink asked if she could have one. They said it meant so much to them for Pink’s support. Pink said they were amazing. Ellen said they were amazing and congratulations.

The U.S. women’s gymnastics team took home the gold medal at the London Olympics 2012. This was the team’s first gold medal since the 1996 Olympics in Atlanta. The members of the winning team were Gabby Douglas, Jordyn Wieber, McKayla Maroney, Aly Raisman and Kyla Ross. Not only did they win the gold medal, but they trounced on their competitors. Russia finished second behind the U.S. team and they were five points behind the Americans!

These Olympians have caused much controversy since their win, with Gabby Douglas getting attention for her hair and many people saying she needs a makeover. Also, McKayla Maroney’s picture has made it’s way around the Internet many times and many memes were made in her honor. Maroney won the silver medal in the vault competition and on the stand when she received her medal she had a look of not being impressed. The bad picture was sent around to everyone and she was placed in many different areas looking not impressed to be there!

Ellen: Another Gift For Pink

Pink was lucky to be on Ellen when she was because she received another gift, but this time for the gymnasts. They signed a Corn Flakes box and said she is part of their team now.