It all started with a YouTube video, which seems to be the best way to land on The Ellen DeGeneres Show. That’s how 14-year-old voiceover guy Jake Foushee landed on Ellen’s set.

She saw his impression of a movie announcer on YouTube. He said his voice changed basically overnight when he was 13. Ellen wondered if the voice change inspired his desire to be an announcer. 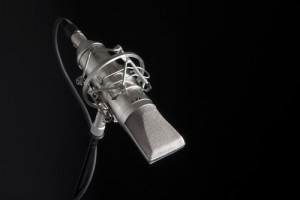 Ellen met a 14-year-old with a very deep voice and had him use his talents to be her announcer for the day. (Image Credit: Helga Esteb / Shutterstock.com)

He said that it took time for him to get used to his new voice. But friends would encourage him to say things in his deep, sonorous voice, and they’d ask him to hit on girls for them.

Jake uses his talent to play jokes with friends, including his JV coach, Jason. Jake said he is not that great at soccer, but he will use his voice to encourage the coach to put him in the game.

He aspires to be a voice actor once he’s done with school, and he’s interested in the opportunities that his voice change could be opening up for him.

To help him add to his reel of sample work, The Ellen Show had him do a voiceover for yet another promo for the return of Sophia Grace and Rosie. Spin them off onto their own show, already.

Here’s the script for the promo Jake recorded:

In a world where pop stars come and go
In a time where princesses are few and far between
Only Ellen brings you one of the most amazing voices you’ll ever hear
Prepare yourself for the spectacular return of Sophia Grace and her hype girl, Rosie
Next all new Ellen

This kid really has a great voice, and he sounds similar to Oprah’s former announcer. He has a voice beyond his years. For even more practice, Ellen invited Jake to do all the announcing for the rest of today’s show. I wasn’t aware that there was any announcing left to do after “Here she is now, Ellen DeGeneres.” But we’ll see what they cook up for him to say.

“What will happen when the one and only Jack Black steps onto Ellen’s stage? Find out after this,”Jake said as the show went to a commercial break.

Maybe Jake can get some career advice from Ellen’s Announcer, Paul Bartholomew.