Ellen DeGeneres’ first guest on her live post-Oscars show was the woman who won the Oscar for Best Actress, Cate Blanchett.

Cate jokingly seemed to stumble out to the stage as if she were totally exhausted. Ellen then asked what she could get for her, saying she had water, Visine, Advil, or a banana. Cat then asked if she had a blanket and someone brought one out for her. 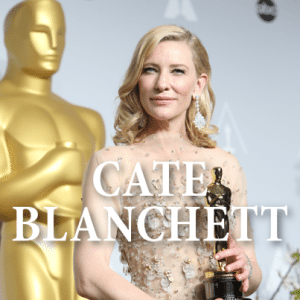 Cate Blanchett sat down with Ellen to talk about winning an Oscar for her role in Blue Jasmine. (Helga Esteb / Shutterstock.com)

Ellen said Cate’s speech was great and that she was right in saying that people want to see women in films, and Ellen loves that she speaks her mind and is real and honest. Ellen also said Cate looks great and asked her if she got any sleep, and Cate said she got a little bit and then apologized for her voice saying she’s in the middle of hormone replacement therapy. Really, she was just a little hoarse!

Ellen then talked about Cate being up for the Best Actress award and Cate said she was so stressed and didn’t think she drank that  much last night but “it was such a release of adrenaline.” She said she and Ellen had talked about her coming on the show and she was worried what would happen if she didn’t win. She joked about stealing someone’s Oscar so that she could still come on the show, in the case that she didn’t win. But she did, so all was good!

Ellen asked if knowing she had already won so many awards for her role in Blue Jasmine and that she was the favorite to win Best Actress, actually put more stress on her, of it it made her relax more. Cate Blanchett said “it’s a cultural event, not a horse race” and she doesn’t tweet, so she’s “blissfully ignorant.”

Ellen TV: Passing Around An Oscar

She then asked if anyone in Ellen’s audience wanted to hold her Oscar, and immediately all kinds of hands flew into the air. Ellen handed the Oscar to a woman in the front row and then told her to pass it around. Cate Blanchett joked about how heavy it was saying “you want to win awards so your arms look really ripped.”

It was hilarious to see how nervous Ellen was as they passed it around. She also said “not only are you holding an Oscar, but you’re holding something she slept with last night.”

Ellen then handed Cate a bottle of Ellen water and Cate asked what was in it. “Ellen backwash?” she asked.

Ellen then thanked Cate for being on her show and said because it was live she couldn’t go over and had to go a commercial break. Cate said she actually had no idea it was live and was thankful to not have known that ahead of time.

Before she left, Ellen gave her a shirt that said “86th Annual Academy Awards: Ellen Hosted…” on the front and “and I won” on the back. She then pointed out that her mom ended up with Cate’s Oscar.