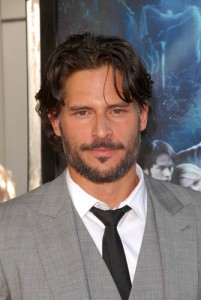 In a world populated by many, many werewolf characters, Joe Manganiello’s Alcide Herveaux from True Blood is definitely my favorite werewolf. I know what you’re thinking: what about Sam Trammell’s Sam Merlotte? Sam is cool, but an actual wolf is a lot cooler than a dog. (s_bukley / Shutterstock.com)

True Blood‘s Joe Manganiello stopped by Ellen to play Pictionary against rapper and actor Common, Ellen’s guest for the day. A member of the audience paired with each star to play the game. Both women from the audience were pumped to be playing Pictionary with these men, and enthusiastically hugged them.

Common said he was terrible at drawing and let me tell you, he was definitely telling the truth. Even though I knew what he was trying to draw, because it told me at the bottom of the screen, I just couldn’t see the connections.

Joe Manganiello, though, and his partner did wonderfully. They ended up winning the competition. Both women went home with a 42 inch Insignia TV.

The audience member won an all-inclusive stay at Couples Tower in Jamaica. Manganiello, who had to be more than a foot taller than his partner, picked her up and hugged her, swinging her around. They both were really excited.

I think it’s really cool that Joe Manganiello only stopped by Ellen to play a game and win it for his partner, letting her have a trip to Jamaica. There was nothing in it for him but the fun of playing the game.