In honor of Allison Janney wanting a Lane 11 at the London Olympics 2012, Ellen DeGeneres was joined by Carmelita Jeter, the world’s second fastest woman of all time, and she raced Allison Janney. 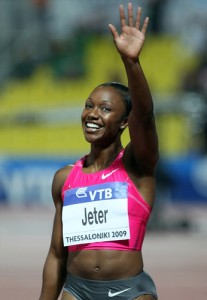 Ellen took a moment and talked with Carmelita Jeter before the race with Allison Janney. Jeter won three medals at the London Olympics 2012, including a gold medal. She won the gold medal in the 4×100 relay, in which the U.S. women set the new world record. About winning the gold and setting the world record, Jeter said it was absolutely amazing. She also won the silver medal in the 100m and the bronze medal in the 200m.

Despite being a favorite to make the 2008 Beijing Games, Carmelita Jeter just missed out on making the team. She made up for that at the London Olympics 2012 and took home three medals, including her gold medal in the 4×100.

With all her success on the track, Jeter is considered the second fastest women of all time. That is quite a feat, especially since the fastest woman of all time is Florence Griffith-Joyner, better known as Flo Jo to most of us. Flo Jo holds the world records in the 100m and 200m, set in 1988 and either have yet been broken.

Ellen headed outside to see Carmelita Jeter race Allison Janney, so Allison can show just how fast these athletes really are. Also, it was a chance for Allsion to live her dreams of having a Lane 11. Naturally, Carmelita blew her away with not much effort needed on Jeter’s part.

On September 14 2012, the movie that brought Ellen’s career back, Finding Nemo, will debut as a 3D movie. Finding Nemo also starred Allison Janney, who was the voice of Peach.