For the last few months, Ellen DeGeneres has been playing a fun guessing game on her show. It’s called What’s On Cee Lo’s Lap, and it was inspired by Cee Lo’s The Voice White Cat.

In the game, Ellen has the audience guess what will be revealed in The Voice judge’s lap when his swivel chair turns around on The Voice. It’s often something silly, such as a beehive or a jar of pickles. 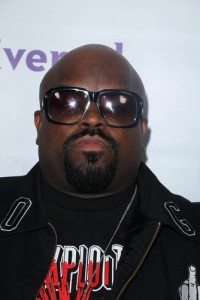 Today, Cee Lo Green appeared as a guest on the show, leading to the first ever live edition of What’s On Cee Lo’s Lap?

Cee Look too his spot on that familiar red swivel chair from The Voice. Playing in today’s game were Nicole Bell and Katie Smith.

“Each of you is going to write down what you think Cee Lo is going to have on his lap when he spins around,” Ellen DeGeneres explained. “If you guess right, you get a point. The player with the most points after three rounds wins.”

This game is virtually impossible to win without some type of cheating, though. Ellen had Cee Lo turn around so the girls could make their first guesses. Nicole guessed pizza, while Katie guessed Cee Lo would have a monkey.

Sadly for both of them, Cee Lo turned around and revealed that he was holding a prickly cactus.

The stakes were high as the women made their guesses for round two. Nicole guessed dog, while Katie bet on balloons. Cee Lo turned around and proved them both wrong again, holding a broccoli casserole in his lap.

I told you this game would be impossible.

Needless to say, no one guessed that was the answer. Therefore the score was zero to zero. Since they were tied, Ellen declared them both winners.

They each received a $500 Ticketmaster gift card. The rest of the audience each received two tickets to Loberace, Cee Lo’s upcoming show at Planet Hollywood Las Vegas.