On her website, Ellen DeGeneres recruited interested fans in a contest to win a trip to the London world premiere of the anticipated summer 2012 movie Snow White & The Huntsmen. The two finalists were in Ellen’s audience today to compete for the grand prize in a game called Grab My Apples.

Angela Linhauer and Elizabeth McClellan came onstage to compete in the trivia game. Angela nervously revealed that she’s a labor and delivery nurse from Missouri. Elizabeth, meanwhile, is from Arizona, where she is a nursing student who also hopes to work with newborns when she’s finished with school. 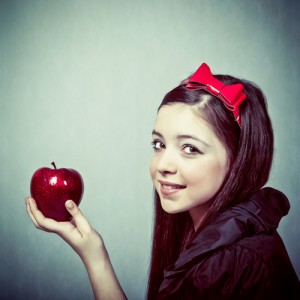 Ellen surprised some lucky viewers with a trip to the London premiere of Snow White & The Huntsmen.

The ladies stood at opposite ends of a table, hands behind their backs. There was an apple in the center of the table, and the first person who knew the answer was supposed to grab the apple. But a wrong answer meant the competitor could steal the question.

The goal was to collect the most apples with correct answers, and one of the apples contained the premiere tickets, a 5-day trip to London, and a chance to interview the film’s stars.

Here are the questions from the game, along with the answers and winners for each question.

Even though Angela came out on top, Ellen surprised the girls by sending them both to London for the summer premiere of Snow White & The Huntsmen, in theaters June 1 2012.

Ellen closed out today’s show just like she opened it, with a surprise musical performance by Carrie Underwood. She sang her new song “Good Girl” for the audience. Carrie also performed “Undo It,” played Ellen’s Animal Celebrity, and talked about her Hockey Playing Husband.