Ellen recently received a letter from a single mom of two in Indiana named Michelle who is going through a very hard time. She’s a single mom going through a divorce with two small children. She and her kids are living with her parents right now, but there were times when they were homeless. Michelle said she’s working two jobs and searching for a career to better their situation. Michelle also said she would work five jobs if she had to, to take care of her kids. 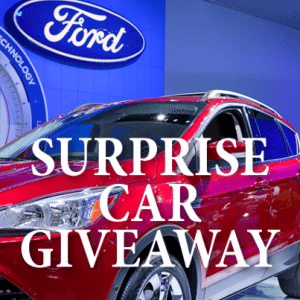 Ellen said she wanted to help her because Michelle had a positive attitude. Ellen sent Jeannie to Indiana and surprised Michelle with a phone call. She pretended to be someone interested in removing snow from Michelle’s driveway, but then she dropped the pretense and Michelle couldn’t believe it. Michelle gave Jeannie a huge hug when she saw her.

Even though it looked very cold in Indiana, Michelle came out barefoot onto the porch and sidewalk. Ellen wondered what inspired Michelle to keep going. She said her kids because they’re the love of her life. Michelle said her car is still in the shop because the transmission went out. Ellen said she didn’t need to get it out because Ford wanted to help her get back on her feet with a 2015 Ford Escape.

Michelle and Jeannie ran down the street, where the Ford Escape was lit under a streetlight, even though Michelle was still barefoot. Ellen went to a break, telling Michelle to get a coat and some socks.

When they got back, Michelle was dressed warm and with her kids, who were also dressed for winter. Michelle’s kids are Jackson, who just turned 6, and Ellie, who’s 4. Ellen said she knew Michelle sold some of her clothes and was cleaning houses to pay for things for her son’s 6th birthday. Now, she’s worrying about Christmas.

Ellen said she just had to make the right choice. There were two stockings. One of them had something naughty and one had something nice. They were labeled 1 or 2. Michelle asked her kids to choose. Jackson chose 1, which had Ellen’s The Only Holiday Album You’ll Ever Need Volume 1. But it also had $10,000 from Shutterfly. Michelle couldn’t believe her luck and immediately started crying, completely overwhelmed with everything.