Of all the games Ellen DeGeneres likes to play with her audience, one of the most fun to watch is Know Or Go. That’s the one where three people from the audience compete for a prize by answering trivia questions.

The catch is that they’re high up in the air on a giant platform. If one of them get a question wrong, the spot they’re standing on goes away and they fall into the platform and out of sight. 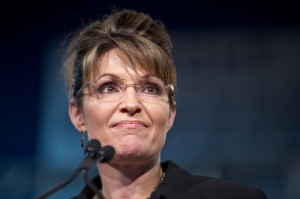 Could you answer Ellen's questions about current events, like Sarah Palin on Today? Take the quiz and see for yourself. (Image Credit: Christopher Halloran / Shutterstock.com)

Today was a first for Know Or Go, according to Ellen, who said they’ve never had a woman in a dress play the game until now, thanks to Jackie, who announced that she didn’t have shorts on under her dress.

Here are the questions from today’s game, centered around Current Events.

Ellen: Know Or Go Championship Round

Nies was the last woman standing, but Ellen put her through her paces with more questions. She even threatened to ask Nies questions for the whole hour.

Falling into that big contraption has got to be fun.

For playing the game, Ellen gave all her contestants a 32” Samsung TV.

Ellen Dance Song: “Got To Give It Up”

After the game, Ellen and the contestants did a victory dance to Marvin Gaye’s “Got To Give It Up.”

Download an MP3 of “Got To Give It Up” by Marvin Gaye.