Thousands of employers are complaining that graduating college seniors are not prepared for job interviews today. Citing one example of a student that actually answered their iPhone during an interview, she painted a picture of the totally under-prepared college graduates spilling into the job market. In the interviewee’s defense, though, said Ellen, he was drunk. Another college graduate brought her cat to an interview…that has future internet meme written all over it. Ellen coined a new phrase playing off of a classic work-related phrase: “bring a cat to your interview, and you’ll never work a day in your life.” With reports of another student bringing their parent to the interview, employers are left scratching their heads. 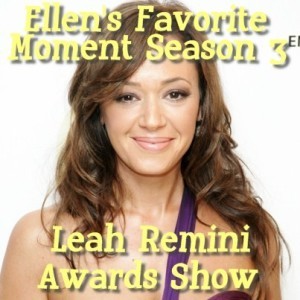 Ellen reminisced on one of her favorite moments from season three with Leah Remini. (image credit: s_bukley / Shutterstock.com)

Not being one to complain about problems without posing a solution, Ellen offered a few tips to graduating seniors. “Think of it as a first date,” she said, “you ask a lot of questions, you listen to each other and if things go really well, you give a little kiss on the mouth.” If that doesn’t work, she suggested dancing, and then broke into a little jig to Justin Timberlake’s hit “Suit and Tie.”

Ellen has a new game out: the Heads Up app. Essentially, it’s a game of charades that allows you to tape the charaders and share videos of your friends trying to act out things like soccer, lifting weights or skydiving. Okay, so I don’t know how you’d do that last one, but that’s not my job. I’m not the one using the Heads Up app. Anyhow, Ellen shared some videos that viewers sent in and watched a wedding party in dresses and high heels try to get the person to guess “soccer” is as funny as you think it would be.

Ellen has been going through her top 10 favorite moments from her decade-long run, and today she showed us her favorite moment from season three. Leah Remini, of King Of Queens fame, had never been nominated for any award in her entire acting career. Ellen, being the charitable individual she is, threw her a mock awards show to give the actress a chance to give an acceptance speech. It ends with the two wrestling on the floor, so you know it’s worth watching. Check it out below.

Ellen recently played blindfolded musical chairs on her show and found a new friend in the process. Tess Ellie, a huge fan of Ellen’s, was such a hoot while playing the game that Ellen invited her back to chit chat. Originally from New York but currently getting her masters in theater at UC San Diego, the aspiring starlette is a full-time student.

Ellen decided to test Tess’ acting skills by sending her out on the sidewalk to pretend to drop a ton of greeting cards and reward cash to any passerby that stopped to help her pick them up. However, she had to use her acting skills to sell the part! No one will help someone pick up a dropped item off the ground if it doesn’t look like they really felt it when they dropped it. Armed with an earpiece, Tess was only allowed to say things that Ellen whispered into her ear.