Ellen DeGeneres is a passionate animal advocate, and it’s no surprise that her goodwill and sympathies extend to the planet as a whole. She kicked off her Earth Day episode by “remind[ing] us to love the planet that we live on and take care of it. It’s the only one we’ve got.”

She said that she’s doing her part to save energy, by taking the battery out of DJ Tony’s car, for example. I’d say that’s not a bad move, though given his parking skills it’s probably more of a public safety issue than an environmental one. 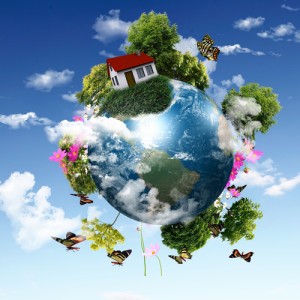 Ellen DeGeneres celebrated Earth Day with her audience by playing her version of Musical Chairs.

Ellen said that recent temperature fluctuations are underscoring concerns about global warming. She pointed out that the mercury has risen from 50s to 80s just in the course of a day. I have a hard time thinking about our recent weather patterns and not thinking that something has definitely changed in recent years.

Anyway, Earth Day is as good a reason as any for Ellen to allow male models to play shirtless musical chairs with blindfolded members of her audience.

From the audience, she invited contestants Lana, Kathy, Brandy, Morgan, and Courtney onstage to participate. You know their days just got markedly better, because not only do they get to play the game, they’re also about to load up on some sweet prizes.

This game is just like musical chairs, but all the female contestants are blindfolded. When the music stops, they are to find the ice cubes, which the Polar Bear Male Models are sitting on, and sit in their laps. Of course, the ice cubes move during the songs, and in each round the person who can’t find a seat is eliminated.

To aid the blindfolded women, the game area is outlined with a large red mat on the floor. When the music stopped the first time, one woman found a seat immediately, but the other three struggled hilariously, mostly running into one another in their Polar Bear search. At least two of them touched one of the Polar Bear models and kept going.

Finally, one contestant was eliminated. “We have to move faster than this,” Ellen said before round two. “The glaciers are melting.”

In round two, the chairs were shuffled again, but all four remaining women crowded around the same Polar Bear, which was hilarious but wasn’t getting the game going any faster. Then a couple women wandered off the mat and out of the designated area. One of them was ultimately removed from the competition.

For round three, the women were once again lost and running into one another. It was hilarious to watch, but it did seem like the game was taking a long time. But that’s OK, because it was time for the final face off.

Finally, the winning contestant was the only one to get a seat. Really though, are there any losers in this game? Everyone gets something out of it, especially the audience.

Morgan was the winner, and she received a 3-day, 2-night stay at the La Costa Resort and Spa in Carlsbad, California. Because it’s Ellen, each of the other four contestants also won a trip.