Ellen reminded DJ Tony that today was Classic Joke Monday. I guess you can print these out to entertain children or the easily amused.

Here was today’s classic joke from the show: What did the judge say when the skunk walked into the courtroom?

Answer follows: Odor in the court. 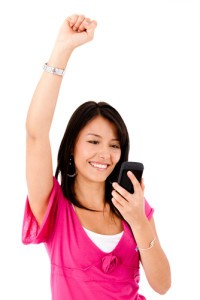 Ellen shared silly text message mistakes caused by autocorrect. Has this ever happened to you?

She had someone dress up as our 16th president, Abraham Lincoln, to scare unsuspecting audience members who were taking photos in the booth.

He would wait until the camera flashed before terrifying the unsuspecting people. That way their expressions of terror would be caught on film. There were lots of screams, a few boob grabs, and at least one person fell out of the photo booth onto the floor.

Now those are some Facebook-Worthy Photos.

But this parody version sounds like the real thing and would make learning English as a Second Language even more confusing. Click on the linked words to hear the incorrect pronunciations for yourself.

She showed some samples of his work. First was Rendezvous, which he pronounced RANDEEN’S VOOP US.

Then there was Carpe Diem, which he pronounced CRAPPY DIME.

Finally, there are Supercalifragilisticexpialidocious. I can’t even render that phonetically, so you will have to see it for yourself.

The Pronunciation Guy heard that he has been on featured on Ellen’s show, so he made her a custom pronunciation video.

Here is how he suggested you pronounce Ellen DeGeneres: ELL ALLAN DAR GIMINITS

This would be really irritating if you were learning English, but it is pretty hilarious if you already know your way around the language.

Speaking of abusing the English language, next Ellen talked about the problems we have with the autocorrect feature on our phones.

Maybe you have seen Damn You Autocorrect, a funny website that collects screenshots of people’s most embarrassing adventures with autocorrect software.

Ellen shared some particularly entertaining examples. In one, a mother tried to explain to her daughter that she was promoted at work.

The next texts were between a father and daughter.

In the next silly message, a phone corrected “nasal” to “nasty,” so the text said, “Feeling stuffy in the nasty region.”

Ellen Autocorrect: Love You To Prairies

Another woman admitted she was drunk after multiple attempts to spell “Love you to pieces” failed.