Before hosting a performance from the new season of So You Think You Can Dance, Ellen said a lot of the submissions to her Clumsy Thumbsy segment have had nothing to do with Autocorrect and everything to do with adults not understanding technology and the modern slang it has spawned. Thus, she introduced the new segment apPARENTly confused.

The segment featured humorous text conversations, usually between children and their parents. For example:

Another conversation featured a text from a woman who texted her father “<3”. Her father didn’t know the text symbol for “heart,” so he asked her, “What is that? A butt with a cone?” 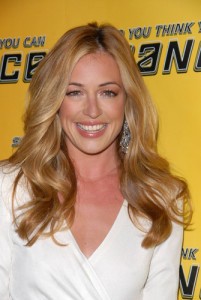 Performers from the Fox reality show So You Think You Can Dance performed for Ellen to promote the season premiere. (s_bukley / Shutterstock.com)

Ellen: So You Think You Can Dance

“I’m very excited that the new season of So You Think You Can Dance starts tonight!” Ellen said. “One of my favorite shows.”

To celebrate the premiere of season nine of the show, a group of dancers from the show performed a dance to The Wanted’s “Glad You Came” from their self-titled album.

The dance was great. It was very lively and energetic, which suited the song well. Parts of it were quite sexy as well. The highlight was definitely when one of the dancers took a moment to do a parody of the robot.

The group ended the song by running over to Ellen‘s guest chair and draping themselves over and around it. It was timed perfectly.

The new season of So You Think You Can Dance airs this summer on Fox.

Ellen sent her assistant Amy to shop for swimsuits for her. When the camera cut to Amy, she had smeared her eye makeup to make it look like she had been crying. The gag was that Amy felt very self-conscious shopping for Ellen because Amy is more obese than Ellen.

She layered especially thick by pretending to cry when she said an employee at the swimsuit store pointed out Amy‘s “problem areas.” The gag itself was tasteless and hackneyed. Fat jokes? Really? C’mon Ellen–you’re better than that.

That aside, it didn’t really matter because the entire segment was just a plug for Citibank. Ellen made countless references to the bank and talked about how great its rewards are. However, it was not without purpose–the entire audience got iPads at the expense of Citibank.

“Amy I think you always look beautiful in whatever you’re wearing,” Ellen said, in order to comfort Amy about being slightly obese.

“Thank you Ellen but you know what would make me look extra beautiful–the new 16 gig iPad!” Amy said. “Ellen, will you buy it for me? Please, please, please!”

“The only way I would buy you one is if you brought back,” Ellen said as she started counting the audience members, “[one for] everyone in the audience.”

Amy came out from backstage with a huge display cart of iPads for the audience. “iPads for everyone!” Amy said.