Today was Ellen’s 1600th show. That means 1600 hours of television. Or as Ellen put it, a slow week for the Kardashians. 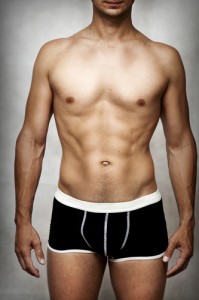 Ellen is looking for the first Ellen underwear model.

Ellen wanted to share every lesson she’s learned from the last 1600 episodes. Unfortunately, she only had time for the top six.

After one of Ellen’s viewers sent in a picture of her husband in Ellen underwear she posted it on her Facebook page. The photo got 25,000 likes and gave Ellen a great idea. Send in a photo of yourself in Ellen underwear and you could win a trip to the Ellen show and a year’s supply of Ellen underwear! She’s looking for male and female submissions.

Ellen: What’s Wrong With These Photos?

“How can someone not know that that’s what they’re doing?”

Well put, Ellen. The first photo was a picture of a sign for “Mommy & Me Adult Dance” classes. As Ellen was right to point out, that’s incorrect grammar. It should be mommy and I.

The second photo was pretty hilarious as well. A viewer found a unique “Pole Dancer” doll at the store.

“To be fair she’s putting herself through preschool!” Ellen said.