Ellen kicked off her episode by having a special audience dance-off. She told the audience members she called down that she hoped they wore their dancing pants.

There were five dancers in all, one of whom was a man. Men are unprecedented in Ellen’s games, so it was nice to see one represented. Each one took turns dancing, showing off their best dance moves. Impressively, two of the women wore high heels for their dance on what looked like a very slick floor. 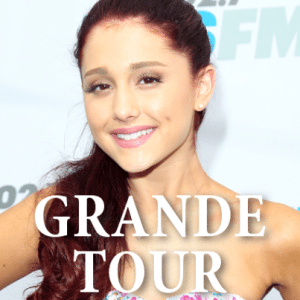 Ariana Grande was the celebrity hiding in Ellen’s bushes to promote her tour. (Helga Esteb / Shutterstock.com)

Lala and Clay, the man, both won the dance-off. That means they got to do the special bonus round. They both had to put on giant bras, including the man. They got to play a game called Stuff Your Cups. The two of them entered a money machine and had to grab as much money as they could and shove them in their cups. There were lot of hundreds in the machine and both of them stuffed their bras well.

But despite their efforts, JC Penney rounded the money they won up to $5,000 and gave the audience $150 gift cards.

Ellen: Who’s In My Bushes?

Ellen asked if the person liked toast, but the person in the bushes said no. The person definitely sounded like a girl. Ellen said it sounded like a 3-year-old. The girl spoke in a high-pitched Indian accent that was obviously fake. Ellen asked what’s one thing the person never told anyone before. She responded that she only wears Ellen underwear.

Ariana Grande said she’s started preparing for touring in February. She invited Maddie to come to the tour and Maddie got special tickets to the show.