Pam and Jim have been fighting over their nine-year-old daughter for seven years and have spent about $1 million in court costs. 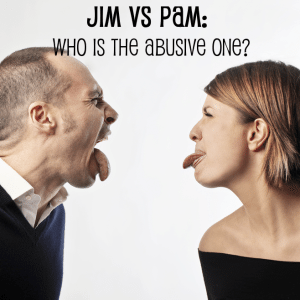 Dr Phil named over Pam’s record of abuse and Jim’s equally horrible red flags that he flew before their marriage. They both have done things wrong.

Dr Phil addressed the allegations against Pam, and wowza there are a lot of stories! Pam said she has never tried to run Jim over with a car, never assaulted his sister at a school function, never attacked Jim with a knife, and never attacked Jim’s mother.

Did Pam Attack Her In-Laws & Jim?

Something doesn’t make sense about Pam’s story. She’s been incarcerated about five times for various charges, including battery. She said that the attack on Jim’s sister was just her pouring water on her at a school function. Pam had to take anger management courses after the incident. Dr Phil said this is a bad example for her daughter.

Pam said the attack by Jim’s mom was her against Pam. Pam denies kicking ehr ex-mother-in-law in the legs, but did spit on her. She claims that Jim’s mom was trying to rip her clothes off of her. All of this makes her look like a crazy woman, Dr Phil said.

Before they were married the first time, Pam saw several red flags with Jim that she ignored. She said that Jim would spy on her at work and tried to get information out of her underage son by getting him drunk. Pam claims she had to write down every partner she’s had before Jim. Jim supposedly went through Pam’s things looking for evidence that she was hooking up with other guys. She had to file complaints are work because they worked at the same place.

Dr Phil asked if this is a man that is spying on her, stalking her, calling her names, and so much more, then who did she turn down to marry Jim?