Why Did Danny Attack Julie?

Julie said that if she had put her phone on silent, Danny never would have attacked her the day before the show. She blames herself and Danny said that she is lying. Her daughter never texted her, but someone named “Veronica” did,” Danny said.

“What difference does it make if it was her daughter or Bart Simpson?” Dr Phil asked Danny. He said that it’s not Danny’s place to control her. He told Danny that he is not in charge.

Danny said that it’s a problem for him that Julie always lies. It really enrages him that she doesn’t tell the truth all the time.

Signs Of Abuse In Julie’s Relationship 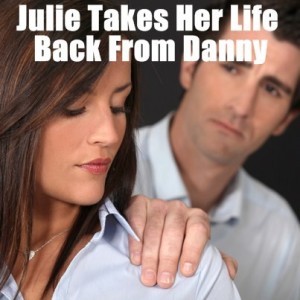 After confronting Danny’s abusive ways, Julie takes her life back. She is done being abused by her boyfriend and ready to be herself again.

Dr  Phil gave Danny a big picture look at the characteristics of abuse. The victim suffers isolation and Julie has been isolated from her family. It’s easier for the abuser to get at the person once they are controlled.

They are called names and their life is threatened. The abuser will intimidate them into doing what they want. The victim is completely controlled. Julie is monitored and stalked wherever and whenever she goes out.

Also, an abuser will physically harm or destroy the victim’s property. They threaten the victim’s family and emotionally use the victim. After all of this, the victim will apologize and make excuses for the abuser. Julie has said “sorry” more than 100 times in her day with Dr Phil.

Danny Confronts His Abuse Head On

The only thing that Danny doesn’t admit to doing is threatening her children. He is an out of control abuser. Dr Phil made him watch more of himself putting Julie down.

“I got it all from her,” Danny said with tears in his eyes. It seems like this is his defense mechanism.

Julie Takes Her Life Back From Danny

Julie said she is very afraid of Danny. She feels like she is his property and the only person allowed in her world is Danny. He would make any of her friends go away. He makes her feel like she deserves this punishment. She feels horrible about who she is and like Danny’s personal puppet. If she doesn’t do what he says, she will get put down and hurt.

Danny calmly took the truth. Julie doesn’t understand this prisoner type of love that Danny shows her. She said she is tired of apologizing for everything she does. She is not sorry for anything. The crowd was behind her 100 percent.

“I’m taking my life back from you. I’m going to be who I really am. Not the person you made me, because I don’t like her. It’s not my fault. It’s not. And I’m not sorry. You don’t deserve me,” Julie said.