On April 2 2013, Dr Phil tackles some mother-daughter drama. Dora is a narcissist, hypochondriac, drama queen and liar. Her daughter Leah is ready to assassinate Dora’s character and expose her true side. Dora denies it all and thinks that it’s Leah with the problems. Then, Dr Phil and Troy Dunn give them advice on finding a common ground. Also in this episode, Carrie thinks her mom is dating strangers online. Is Paula in danger of getting tangled up with the wrong men? 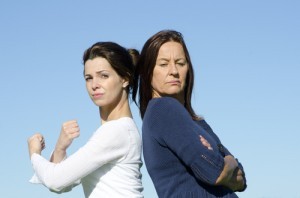 On April 2 2013, Dr Phil talks to mother-daughter pairs that are having serious drama.

Leah says looks can be deceiving. Dora is secretly a narcissist, hypochondriac, drama queen and liar. Leah said her mother lied about having cancer to get sympathy and thrive off the drama. Dora denies Leah’s character assassination and has medical proof that she was sick.

Dora says that Leah likes to be the center of attention. She says Leah refuses to let her into her life and let her see her grandchildren. The depression that this causes Dora only makes her illnesses worse.

Dr Phil and The Locator Troy Dunn spend some time with this mother and daughter on April 2. Their experiences together might be able to help Dora and Leah find a common ground and heal their hurts.

Also on this episode, Carrie tells Dr Phil that her mother Paula is meeting strangers online. Carrie is 61 and has been doing more than just casually dating, if you catch my drift. Carrie is upset and disgusted with her mother. Even though it would be easy to throw away her relationship with her mom, Carrie is afraid for her mom’s safety.

Dr Phil sits down with Paula and Carrie on April 2 to look at this behavior. Is Paula in danger or is she just having fun in her later years?